Nigeria begins their defence of the U-20 AFCON crown away to Burundi as the race for a place at the final tournament of the 20th edition of the biennial championship gathers momentum. 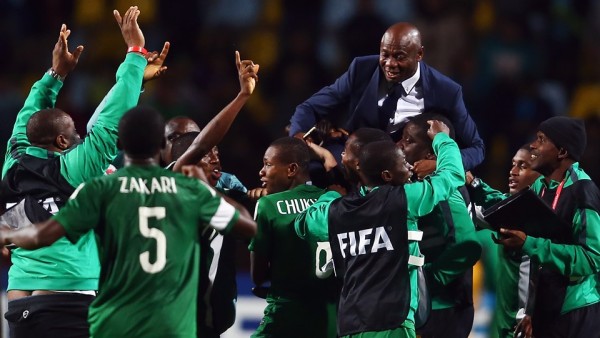 Last year, the Flying Eagles conquered the continent in a blistering style without losing a match under coach Manu Garba who has since being replaced by Emmanuel Amuneke after the one-time African Footballer of the Year, led Nigeria’s U-17 team (Golden Eaglets) to a record fifth FIFA World Cup title in Chile last year.

Incidentally, Amuneke has promoted virtually all members of the Chile triumph and reckons that his youngsters would be ready for the ‘rough and tumble’ task  given the  stiff competition expected in Bujumbura.

This would be the first match for both sides in the qualifiers, since the West Africans were exempted from the First Round, while Burundi reached the second round following the withdrawal of DR Congo.

“We are preparing, and have been working pretty hard for the match against Burundi,” stated Amuneke in an interview with CAFOnline.com ahead billed for the Prince Louis Rwagasore Stadium in Bujumbura on Saturday.

“They (players) know what is expected of them and collectively as a team, we are looking forward to the match with optimism. Individually and collectively, we are doing everything in order to be on the same page and when we get to Burundi (Bujumbura), we are going to give a very good account of ourselves as a team,” noted the former Barcelona winger.

The once twinkle twinkle little stars according to Amuneke, have gradually settled down to business with a string of morale-boosting victories against selected local sides, as well as the Olympic-bound Under-23 team.

Speaking further, Amuneke who broke unto the scene as an U-21 player at the 1991 All African Games in Egypt, said he was not oblivious of Nigeria’s status as defending champions plus a record seven titles, saying he has set both short and long term goals for the Flying Eagles.

“I’m not under any pressure but our business now is qualification for the U-20 AFCON in Zambia. I’m not going to discuss what I know about Burundi here but what I know is that we are going to face a formidable team; and I’m confident we would be ready to play them in their home and when they come here for the return match.

“Though there are factors like high altitude as well as the timing of the match to deal with, we are preparing our players psychologically to be ready for these challenges.”

The Nigeria trainer has poured cold water on reports casting doubts over the availability of leading marksman Osimhen, who sustained a shoulder injury in the friendly against the Olympic team last week.

“Victor (Osimhen) is fine and has resumed training. This team is not only about Osimhen. We are not only looking up to Osimhen against Burundi. If he’s not available, there would be somebody to take his place.

“I don’t depend on only one or two players. We are building a team that can play collectively. Osimhen is important to our team but we have other important players in the team as well,” he concluded.

The return leg will take place on the weekend of 10-12 June 2016, with the winners advancing to the final round of the qualifiers that will give birth to seven teams to join hosts Zambia for the final tournament from 26 February to 12 March 2017.