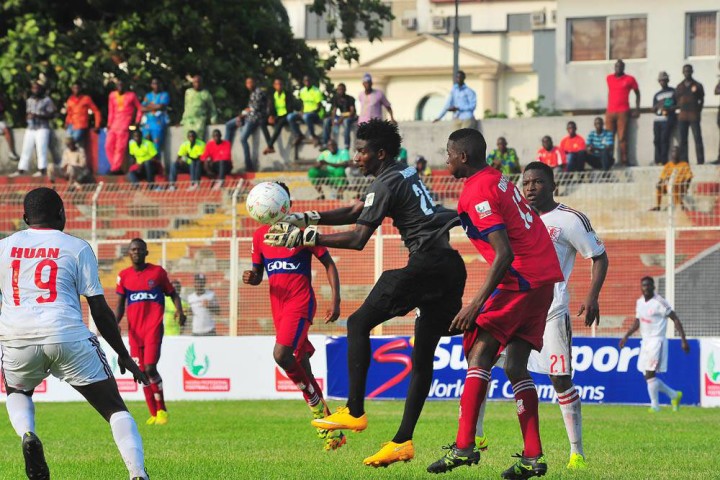 Following are the results of Match Day 18 fixtures in the 2015/2016 Nigeria Professional Football League (NPFL), played on Wednesday:

Ikorodu United got their third win of the Nigeria Professional Football League as Fatai Oluwadayo proved decisive in a 1-0 win over Warri Wolves at Onikan Stadium on Wednesday.

Oluwadayo curled his free kick from 25 yards out in the closing stages of the first half and that strike proved decisive thanks to the exploits of goalkeeper Adamu Audu, who prevented the visitors from wreaking havoc.

Oga Boys missed two further opportunities to put the game to bed, with first Ojukwu David and then Yemi Olasupo missing when clean through against Dele Ajiboye, who closed down the angle well and devoured the shots.

Warri Wolves continued to press in their search for an equaliser, but with Goodluck Onamado absent in body – and Kelvin Itoya unable to conjure his usual magic – which sealed the maximum for Okpodu against his former team.

Victory saw the hosts take full advantage of Giwa’s no show against Enyimba and are a point away from the base of the NPFL log. 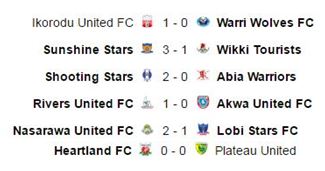 The striker, who had bagged eight goals before the game, gave Sunshine Stars the lead on the half hour mark from the penalty spot before adding to his tally in the second half.

It was a slow start to the match as the Owena Waves dominated the early possession without threatening the Wikki Tourists defence.

Okiki handed Stars the breakthrough they needed when he neatly converted a 30th minute spot kick.

Godwin Obaje caused problems for the Sunshine defence. His high work rate was rewarded when he put his team on level terms in the 44th minute.

The three points was sealed for Solomon Ogbeide’s side with six minutes left on the clock when skipper Sunday Abe slotted home from close range.

Shooting Stars ran out 2-0 winners against Abia Warriors in a match that saw Muyiwa Lawal torment the Umuahia based outfit.

The first half didn’t produce any goal as the goalkeepers and defenders were at their best against the strikers.

The second half saw Shooting Stars score goals, as they were handed a golden opportunity in the 50th minute, with Kabiru Umar making the most of a chance to score.

Stars weren’t done yet and asked for more. And the hosts scored six minutes after the curtain raiser. Tormentor-in-chief Lawal netted a goal his performance deserved.

Ovoke Bernard struck in the first half to help Rivers United to a narrow 1-0 victory over Akwa United at the Yakubu Gowon Stadium.

With the result, the Pride of Rivers are second in the table with 31 points from 18 games, while Akwa United have 27 points from the same number of matches.

Heartland and Plateau United played out a tough 0-0 draw on Wednesday afternoon.

It was a game that produced many chances including a long range effort by Roland Koffi and Benjamin Turba’s ambitious shot which struck the woodwork.

The home side pushed in the final half hour and looked the most likely to steal the three points, but they found goalkeeper Isa Danladi in strong form between the Plateau United sticks.

In a bid to show that they are the true landlords of the Aper Aku Stadium, Nasarawa United were 2-1 winners over Lobi Stars.

Esosa Igbinoba and Shammasu Mohammed got the goals for the Solid Miners, with Anthony Okpotu notching the only goal for the Pride of Benue.

United now moves up to 24 points, but they are four points below Lobi Stars.