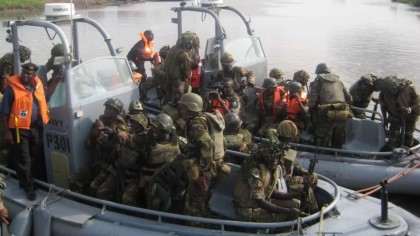 The Joint Military Force deployed to protect oil installations in the Niger Delta, Operation Pulo Shield, on Friday said it foiled an attack on Agip’s oilfield and arrested 19 suspected vandals in several operations in May and June 2016.
Col. Isa Ado, Spokesman of the force, said in a statement made available to News Agency of Nigeria (NAN) that troops have intensified patrols to forestall further destruction of oil facilities following renewed attacks in the region.
According to Isa, troops while on patrol on June 9 along Brass water ways of Bayelsa foiled an attempt by suspected pipeline vandals to destroy Agip’s oil pipeline at Okpoma Community.
He explained that the suspected vandals had dug and planted dynamites beneath the pipeline location in a swamp for detonation before the troops foiled the sabotage operation.
The joint force recovered two dynamite detonators, cable wire and battery.
Ado said that on May 28, troops of the force deployed in Ogbia Local Government Area of Bayelsa along Ebelebiri and Agba communities arrested six suspected pipeline vandals and oil thieves.
Eight Cotonou boats loaded with illegally acquired crude oil were destroyed while the suspects were handed over to the prosecuting agency.
“On same day, troops in continuation of its raid on suspected pipeline vandals’ camps carried out cordon and search operation in Oporoma Community of Delta.
“Ten suspected pipeline vandals were arrested during the operation, one pistol, 195 rounds of 7.62mm special ammunition, 14 handheld radio set, 30 detonating cords and several phones with SIM cards were recovered.
“Other items recovered include diving equipment, one personal computer, Ipad, mobile phones and other items,” the statement read in part.
Ado further stated that in a similar development, the Maritime Component of the Joint Force, the Nigerian Navy Ship (NNS) Delta on May 26 and June 14, respectively, arrested three suspected coordinators of several pipeline bombings across the region.
The spokesman added that one of the arrested suspects reportedly confessed to being part of the group that bombed the Nigerian Petroleum Developing Company (NPDC) crude oil pipeline at Escravos, Warri South West Local Government Area of Delta.
NAN recalls that new militant group, Niger Delta Avengers, had claimed responsibility for the NPDC attack at Escravos crude export pipeline.
Ado said that several bomb related items were recovered from the vandals who bombed the Escravos facility.
He assured that the joint military force will not be deterred by the activities of criminals and remains highly committed in carrying out its mandate professionally within the Niger Delta region.
According to him, efforts are underway to round up fleeing criminals including pipeline vandals and to dismantle all militant camps in the region.
“Those behind this heinous act of bombing of critical installations in the region are warned to have a rethink and tow the line of peace by adopting a legitimate means to address their grievances instead of taking the law into their hands.
“We must embrace and support the laudable and bold initiative by the government to dialogue for peace and development, and call on the communities to guide their youths against acts capable of sabotaging the economy of the nation,” Ado stated.
He urged people of the region to support the force by providing credible and timely information to aid their operations. (NAN)