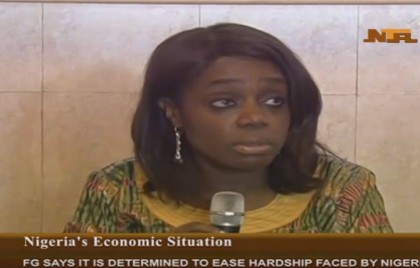 The Minister of Finance, Mrs Kemi Adeosun on Friday said the Nigerian movie industry otherwise known as Nollywood, played a very important role in the country’s economy.
She said this in Abuja at the film industry stakeholder’s workshop aimed at restructuring and reinvigorating Project ACT Nollywood.
The Project ACT Nollywood is a N3 billion grant programme set up by the Federal Government to address challenges impeding the growth of the Nigerian movie industry.
The workshop was to examine outstanding areas of the programme that was yet to be implemented and review them to ensure that they were still appropriate for the industry.
The minister, however, said that the problem of the industry was not in the quality of movies produced but in the structure of the industry.
She said that it was regrettable that pirates were the main beneficiaries of the industry, adding that they waited for creative talents to create a product while they claimed the profit.
According to her, most of those who create the value do not actually get the value in terms of returns.
The minister said that to improve distribution to ensure that the investments actually got the expected return, there was need to evaluate the entire value chain from the tax system to the enforcement system.
She said that there was also a need to ensure sustainability in the industry, adding that a committee would be inaugurated to look into issues raised at the workshop.
“Today, we will inaugurate a committee to review the programme, restructure if necessary and come up with implementation plan.’’
She said that the plan would establish measurable and demonstrable deliverables that would ensure maximum value for the industry’s stakeholders and Nigerians generally.
The Minister of Information and Culture, Alhaji Lai Mohammed at the workshop, said that proper distribution of movies was very important in the industry.
Represented by Mrs Grace Gebe, the minister said that without proper distribution channels, piracy would continue to thrive in the country.

“It is our hope that very soon the N1.9 billion that is meant for the distribution fund will be given to the beneficiaries that had been interviewed and selected.
“If this is done, we are very sure that piracy will be curbed in Nigeria,’’ the minister said.
He added that piracy strives in the country because there was no genuine product in the market, “thus people buy whatever that is available on the streets’’.
According to him, if there is a proper channel for distribution of creative products, nobody will want to buy fake products on the streets.
He, however, expressed satisfaction that the capacity building and the film distribution components of the programme had been successfully completed.
The Permanent Secretary of the Ministry, Mr Mahmoud Isa-Dutse, while giving an update of the project, said that it was being implemented under three grand schemes.
He said that the schemes included capacity building fund, film production fund and innovative distribution fund.
He said that the capacity building fund got an allocation of N300 million and was at 80 per cent completion.
He said that the film production fund with an allocation of N800 million was also being concluded while the innovative distribution fund which got a N1.9 billion was the main crux of the workshop.
He said that for the first component capacity building funds, 247 practitioners had so far been sponsored to attend specialist training.
Isa-Dutse said that several private training institutes were being supported to help enhance their capacities.
“For the film production funds, we have so far co-financed 113 film projects through grants and awards.
“So far, the Project ACT Nollywood has implemented specialist training programmes in Nigeria and abroad in which 247 practitioners have been trained.
“The training is to improve their technical and professional capacities in the entertainment industry thereby employing 2,436 people,’’ he said.
He said that for the innovation distribution fund, 383 completed applications were received out of which 348 were prequalified applications, while 150 of them have been interviewed.
The Project ACT Nollywood, was being implemented by the Ministry of Finance in collaboration with the Ministry of Information and Culture, Nigerian Film and Video Censors` Board (NFVCB) and the Nigerian Copyrights Commission (NCC) (NAN)