Ronaldo Fires, #Portugal Is Through To Euro 2016 Final 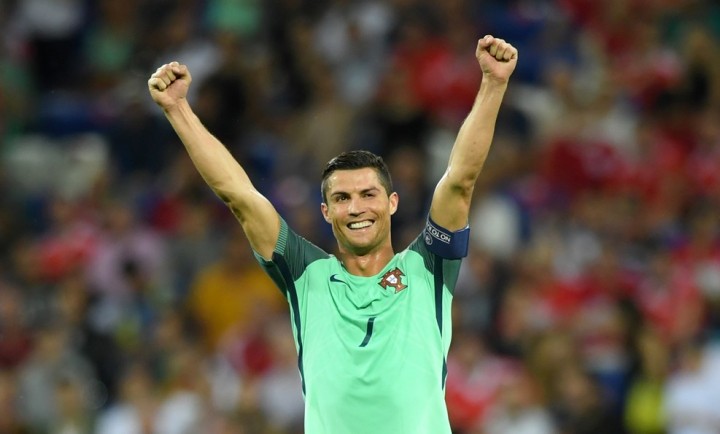 Portugal’s Main Man and Real Madrid forward, Cristiano Ronaldo, turned home a header to break the deadlock and score his ninth goal for the Seleccao at Euro finals, equalling the mark set by the French legend Michel Platini.

Ronaldo pulled level with Platini as the highest goalscorer in European Championship history as Portugal beat Wales 2-0 to reach the final.

The Real Madrid star netted a towering header 50 minutes in to put his side ahead from a well-worked corner.

And Nani slid home to add the second in the next attack to end Wales’ chances of a fairytale final appearance at Euro 2016.

The pre-match talk had centred on Ronaldo’s showdown with Real Madrid team-mate Gareth Bale and it was the Portuguese who shone as his side took another step towards assuaging the pain of their defeat in the 2004 final. 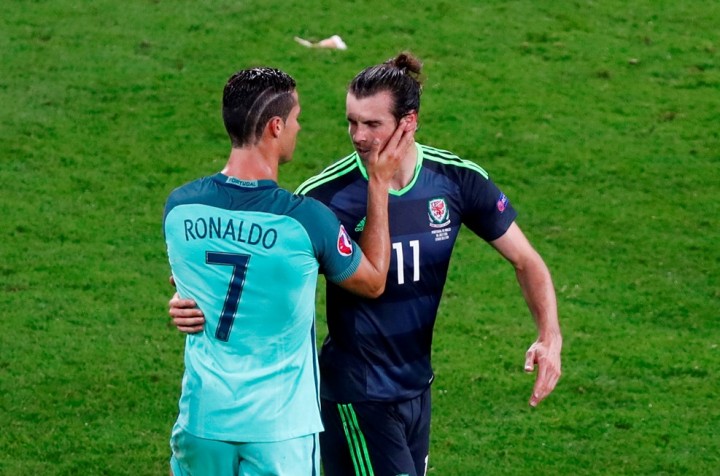 That quickfire double brought to life a semi-final that had until then been a largely cagey affair, with Bale having marginally the better of the first-half head-to-head against his club colleague.

Indeed, Chris Coleman’s side will have been content with their efforts in the opening 45 minutes, Bale steering one shot over and another on target.

Portugal – who reached the last four without winning a game in normal time – had few openings of note, though Joao Mario might have done better with a low strike on the angle.

Yet within eight minutes of the restart their place in the Paris final was practically assured, with hosts France or world champions Germany now standing between a first major international honour for Ronaldo.

Wales – 3-1 winners over Belgium last time out – had Aaron Ramsey and Ben Davies missing through suspension, with William Carvalho suffering the same fate for Portugal, who had to make do without the injured Pepe (thigh).

Ashley Williams made a timely intervention to thwart Ronaldo early on after Wales had sloppily conceded possession just inside their own half.

But it was a nervy start at the Parc Olympique Lyonnais, Mario dragging a shot wide of the mark in the 16th minute to punctuate what was otherwise a tactical midfield battle.

A well-worked Wales corner ended with Bale firing over the crossbar after he cleverly manoeuvred into space and the world’s most expensive player brought a routine save from Rui Patricio following a lung-bursting run.

That proved to be the only first-half shot on target, with Ronaldo heading wide at the far post as a tense opening period drew to a close.

He was not so wayward at the start of the second half, though, climbing high to power home a header from Raphael Guerreiro’s pinpoint cross.

And he was pivotal in the second goal for Fernando Santos’ side, though he would be hard-pressed to claim an intentional assist for Nani, who slid in to divert Ronaldo’s shot beyond the wrong-footed Wayne Hennessey.

Ronaldo struck a dipping free-kick over in the 63rd minute and Hennessey was fortunate to see Mario shoot wide after the goalkeeper had fumbled the ball into his path.

Having lost three European Championship semi-finals, perennial nearly-men Portugal were determined to hold on to their advantage and a beleaguered Wales scarcely applied pressure in the closing 20 minutes.

Danilo almost made it three late on, with Hennessey barely keeping out his close-range effort, as Portugal set up a golden opportunity to banish the memories of their shock loss to Greece 12 years ago, which left a teenage Ronaldo in tears.