Two Black Men Killed By Police In The US, One Live footage on The Internet 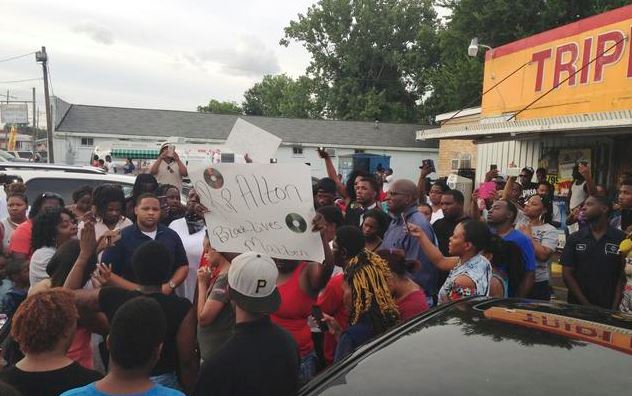 Two black men were reportedly to have been shot dead by police in the United States so far this week.

The second shooting came 24 hours after the the U.S. Justice Department said it had opened an investigation into Tuesday’s fatal shooting of a 37 year old black man, Alton Sterling, in Baton Rouge, Louisiana, by two police officers.

In what was described as “in a confrontational manner”, the two police officers pinned Mr. Sterling to the gun and pointed a gun at his chest. A video revealed the police officer being alarmed at discovering of the man’s gun.

The victim was said to have been shot six times and died of the gunshot wounds.

The second shooting was been reported that a Minneapolis area police officer in Saint Paul, Minnesota, fatally shot a black man during a traffic stop, local law enforcement said on Thursday, and the victim’s fiancee streamed live footage of the gruesome aftermath on the internet.

The victim, was identified by his family as Philando Castile, 32, was shot dead by a police officer in the car, who opened fire on him as he reached for his I.D.

Mr. Castile was in the car with his fiancee in the passenger seat and their daughter in the back seat.

The Justice Department said it was assessing the Minneapolis area incident but did not say if it would start a formal investigation into whether excessive force was used.

Castile’s mother expressed shock. “I never once in my life would have thought that my son would be killed by the persons that were supposed to protect and serve him,” Valerie Castile said on CNN.

The use of force by police against African-Americans in cities from Ferguson, Missouri, to Baltimore and New York has sparked periodic and sometimes violent protests around the country, as well as spawning a movement called Black Lives Matter. Anger has intensified when the officers involved in such incidents are acquitted or not charged at all.

Protesters gathered on Thursday morning outside the mansion of Governor Mark Dayton in St. Paul, about 10 miles (15 km) southeast of the scene of the incident, local media said.

Valerie Castile described her son as a “laid back” but industrious man who worked as a school cafeteria supervisor and enjoyed playing video games. He had a permit to carry a concealed weapon, she said.

Castile, who was waiting for permission to see her son’s body, said she wanted the officer to be prosecuted. The officer’s ethnicity was not clear.