Army to partner NAOWA on family welfare of troops 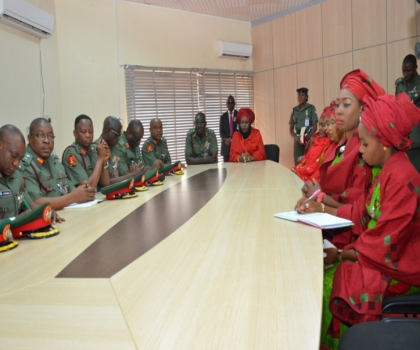 Gen Buratai while commending NAOWA for its initiative towards complimenting the welfare scheme of the Federal  Government and the Nigerian Army promised to support the laudable pet projects of the association targeted at woman, youth, children and the less-privileged in the barracks and environs. He disclosed that the Nigerian Army has concluded arrangement for approval of land for the construction of NAOWA Ultra Modern Hospital in Abuja to carter for the health needs of troop’s families.

The COAS explained that the constitutional role of the Armed Forces is safe-guarding the nation, saying that the task is enormous and challenging. He urged the woman to ensure that the home front is kept in order to enable their spouses work without stress.

The Chief of Army Staff commended the passion and concern of NAOWA over the on-going security challenges facing the country and implored them to always pray for the troops.

Earlier speaking, the NAOWA National President, Mrs UKT Buratai commended the COAS for granting NAOWA members the opportunity to pay the visit. She pointed out the intension of the association to embark on charity programmes that will positively change the lives of the less-privileged in society especially widows and children of those affected by the insurgency.

She further explained that the initiative is the modest effort to contribute to boosting the morale of the troops assuring their families that Nigerian Army has not forgotten the supreme sacrifice of their breadwinner in the service to the nation.

Mrs Buratai commended the COAS for his good leadership role towards improving the standard of the Nigerian Army and its troops noting that the supreme sacrifice Nigeria Army is paying to contend with the insurgency will not be forgotten.