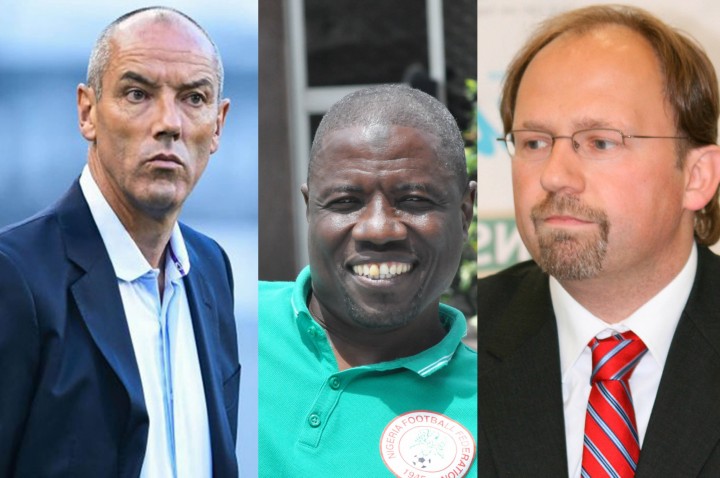 On Friday at the Glass House, the NFF Technical and Development Committee pored over more than 20 applications before cutting the list to three.

Belgian Saintfiet, 43, coached the National Teams of Namibia, Zimbabwe, Ethiopia, Yemen, Malawi and Togo, and also worked with the Qatar U-17 side, Young Africans FC of Tanzania and Free State Stars FC in South Africa.

He assisted Super Eagles’ chiefs Samson Siasia and Stephen Keshi (of blessed memory), and was caretaker coach for two friendlies that the Eagles won against Mali and Luxembourg in Europe at the end of May.

Le Guen, 52, played for Brest, Nantes and Paris Saint Germain and won 17 caps for France, before coaching Rennes, Lyon, PSG (in France) and Glasgow Rangers (in Scotland). He qualified the Indomitable Lions of Cameroon for the 2010 FIFA World Cup finals and also coached Oman.

Chairman of the Technical and Development Committee, Chris Green, told thenff.com: “We set a criteria with which we evaluated the nearly two dozen applications and then agreed on the three persons that we shortlisted.

“The Committee will meet on Monday, 18th July 2016 to interview the shortlisted candidates and immediately name the next Super Eagles’ Head Coach.”