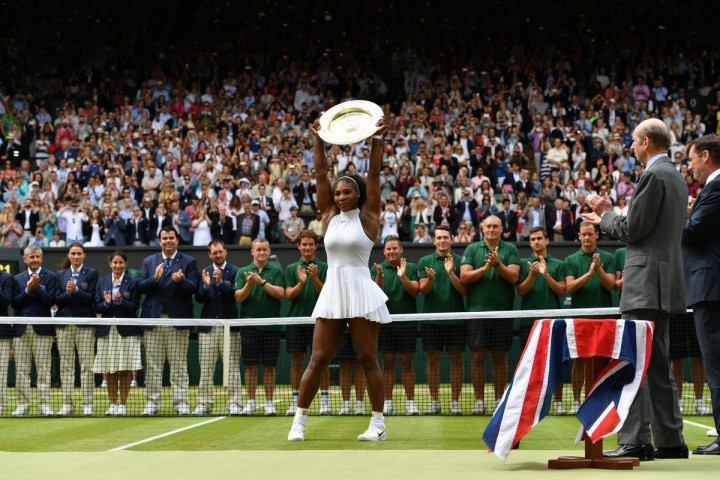 From now, the name Serena and Tennis will forever be remembered together just like Steffi Graf. Ladies’ Wimbledon Singles final: Serena Williams beats Angelique Kerber 7-5, 6-3. It’s a 22nd Grand Slam title to match Open Era record of Steffi Graf. “Victory even sweeter knowing how hard I had to work for it”, Serena Williams said.

From the match stats, Serena’s first serve was an almighty tool today. She got it in 65% of the time and won 88% of points on first serve. Thirteen aces against zero from Kerber, an average first serve speed of 109mph with a fastest of 124mph. She said of Angelique(the world number 22), “Angelique is such a great opponent, she really brings out great tennis in me. Thank you for being that great person. It’s been incredibly difficult not to think about it [matching Steffi Graf’s record]. I had a couple of tries this year and lost to great opponents, one of them being Angelique. It makes the victory even sweeter knowing how hard I had to work for it.”

A little twirl from Serena as she arrives on court to accept the famous Venus Rosewater Dish, a trophy which she is only too familiar with. A rousing reception and sustained applause from this Centre Court crowd. Serena was simply outstanding, more power-packed serving from a totally inspired Williams takes her to 40-0. And she gets the job done straight away from the net. It’s Grand Slam win number 22 to match the all-time Open Era record of Steffi Graf. She has raised her own high standards today and thoroughly deserves this triumph.

Kerber said of Serena, “Firstly, Serena, you are a great person, a great champion. it’s always an honour for me to play you in finals. Congratulations. It’s the best feeling playing here on the Centre Court. I really have the best two weeks here at Wimbledon. Also I would like to say thank you to my box. I have the best team over there and I know you are always supporting me. Sometimes I am not so easy but you are all so believing in me.”