In a special intelligence led operation conducted by the operatives of the Intelligence Response Team of the IGP’s Monitoring Unit at different black spots in Kogi State, three members of a notorious kidnap gang that has for a while operated in major cities in Kogi and neighbouring States were trailed and arrested at their hideouts in the outskirt of Egume and Anyimgba Towns in Kogi State.

The leader of the gang who gave his name as Ibrahim Nasarawa led the operatives of Intelligence Response Team to their den where Edward Abutu Amedu was held hostage. On sighting the Operatives, the armed guards who were stationed by the gang to keep watch over their victims opened fire on the Police and the operatives responded and overpowered them in a tactical operation that saw three members of the kidnap gang suffer fatal injuries while their victim was rescued unhurt. 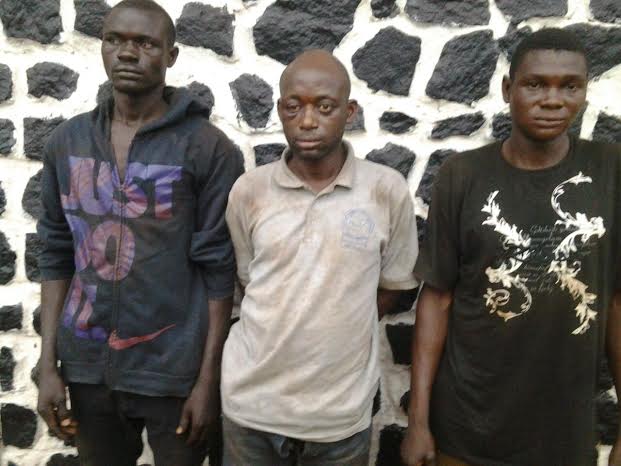 Sadly, Two (2) of our men sustained gunshot injuries and are currently responding to treatment in the hospital while the other members of the gang escaped with bullet wounds.

In another coordinated operation based on credible intelligence generated by Operatives of the intelligence Response Team, three members of a dare-devil kidnap gang that abducted Mrs. Mayo Ohemi, Nichodemus Kadiri and Miss Victoria Abdul from Acharu Egume area of Kogi State were arrested and their confession led to the rescue of the victims who were incacerated in the kidnapers’ camp from where they demanded a ransom of twenty million naira. The rescued victims who sustained various degrees of injuries in the hands of their abductors are now receiving treatment in the Hospital.
The arrested suspects are:

This renewed onslaught on criminal elements in Kogi State is designed by the Inspector-General of Police to stem the tide of kidnapping for ransom armed robbery and other criminal activities and shall be sustained until all the criminal elements are flushed out of the State.

IGP Idris warns all criminal elements operating in any part of the Federation to turn new leaf and be counselled or ignore the warning and end up in the arms of the law.

He assures the general public of his determination to provide community oriented service that will ensure active community partnership in crime prevention and control.