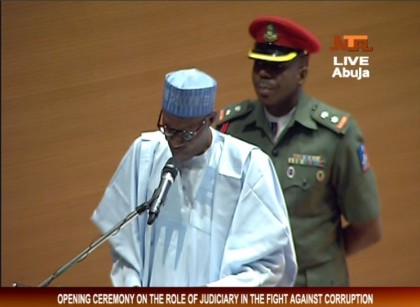 1.      Distinguished ladies and gentlemen, it is a great pleasure to be amongst you today as stakeholders in this national fight against corruption in Nigeria. I welcome specially the invited judges and guest from other jurisdictions. Thank you all for taking time out of your busy schedule to honor this invitation. Welcome to our dear country Nigeria.

2.    I also want to commend the Presidential Advisory Committee Against Corruption, the National Judicial Institute, the United Nation’s Office on Drugs and Crime (UNODC) and the Commonwealth Secretariat for conceiving such an important and timely workshop and making it happen.  This workshop is important and timely not only because far-reaching reforms of the judiciary remains one of the key priorities of this administration but also because it offers us a unique opportunity to interact and agree on the basic tenets and guiding principles that will make our efforts acceptable to all right thinking people.

3.     Today gives us an opportunity to reflect as well as build upon the efforts of the judiciary’s fight against corruption and also to assert this administration’s commitment towards this struggle.  A well-functioning criminal justice system is imperative to address corruption effectively, as we seek to move our country towards greater growth and development.

4.    I recognize the tremendous efforts the judiciary is making to foster justice and accountability in Nigeria. Even as we recognize those efforts, it is worth reminding ourselves of the persisting challenges that confront the criminal justice system.

5.     Having said that, the responsibility of the judiciary in a democratic society such as ours is a critical one. It is one of the three pillars of the modern democratic nation state and is essential to the process of checks and balances, which is so fundamental to the way societies such as ours are meant to operate and function. This apparent function that the Judiciary plays is undeniably one of the cornerstones of any effective strategy against corruption.

6.    As already established, corruption is a global phenomenon, it knows no boundaries. It exists and affects all countries. It exists in the public sector, the private sector, and indeed, in all facets of the society.

7.     Distinguished ladies and gentlemen, while it is true that corruption is a global phenomenon occurring in almost all countries in the world, the problem is much more pronounced in some countries than others but more complicated in developing countries. It has now become clear that corruption is one of the main obstacles to peace, stability, sustainable development, democracy, and human rights around the globe.

9.    Indeed that is why Article 11 of the United Nations Convention Against Corruption, provides that the independence of the judiciary and its crucial role in combating corruption, shall, in accordance with the fundamental principles of a State Party’s legal system and without prejudice to judicial independence, take measures to strengthen integrity and to prevent opportunities of corruption among members of the judiciary.

10.  What Article 11 simply means is that a corrupt judicial system not only violates the basic right to equality before the law but also deny procedural rights guaranteed by the Nigerian Constitution.

11.  Now, in carrying out its role in the fight against corruption, the judiciary must remain impartial and most importantly, be seen to be impartial. It is incumbent on the judiciary to analyze facts based on the applicable law without prejudice and penchant regarding the case they are dealing with, and without acting in any way that would favor the interests of any of the parties.

12.Where judicial corruption occurs, the damage can be pervasive and extremely difficult to reverse. It undermines citizens’ morale, violates their human rights, harms national development and depletes the quality of governance.

13.  In tandem with the above and as gatekeepers of the law, the judiciary must maintain its absolute independence. Judges should hear and handle their assigned cases without any external pressure or influence either by state powers, or by their hierarchical superiors, stakeholders or economic interest groups.

14. The Judiciary must take steps to ensure that it is not seen as being partisan. As such, it must be aware of the sensitivities of the public and take steps towards avoiding even the shred of a doubt as regards its independence. In justice, integrity is a necessity. Hence, Judicial Officers and all other members of this sector must always demonstrate manifest integrity.

16. Critically important also, is the sacred duty of the judiciary to ensure that criminal justice administration is not delayed. I am worried that the expectation of the public is yet to be met by the judiciary with regard to the removal of delay and the toleration of delay tactics by lawyers. When cases are not concluded the negative impression is given that crime pays. So far, the corruption cases filed by government are not progressing as speedily as they should in spite of the Administration of Criminal Justice Act of 2015 essentially because the courts allow some lawyers to frustrate the reforms introduced by law. This certainly needs to change if we are to make success in our collective effort in the fight against corruption.

17.  As we are all aware, I have made the fight against corruption one of the top priorities of my administration in the hope of restoring the economy and build a new Nigeria. In the face of dwindling revenues and in a bid at repositioning ‎Nigeria’s economy, it became obligatory to swiftly tackle two ills; waste and corruption.

18.The eradication of corruption is a joint task involving not only judges and members of the legal profession, but literally all stakeholders, including all branches of Government, the media and the civil society. The challenge is to come up with an integrated approach that balances process and substance, promote clarity to ensure a coherent and realistic formulation of objectives.

19.To this end, the Judiciary is under a duty to keep its house in order and to ensure that the public, which it serves, sees this. Thus, we cannot expect to make any gains in the war against corruption in our society when the judiciary is seen as being distant from the crusade. This will not augur well and its negative effect will impact all sectors of society. The judiciary must fight delay of cases in court as well as it fights corruption in its own ranks, perceived or otherwise. We expect to see less tolerance to delay tactics used by defense lawyers or even the prosecution in taking cases to conclusion.

20.  Let me conclude by saying the future of anti-corruption efforts in Nigeria rests not only on well-functioning, preventive systems, but also an effective sanctions and enforcement regime in accordance with the laws. WE count on the judiciary to assist in this regard.

21. On our part, we are committed to promoting and supporting the judiciary to achieve a judicial system that is well staffed, well-resourced and that promotes and recognizes dedicated, committed and motivated Judges. The Judiciary can count on me for this so that together we can rid our nation of the cancer of corruption.

22.   It is now my singular honor and pleasure to declare this International Workshop on the Judiciary and the Fight Against Corruption officially opened. A corruption free Nigeria is possible therefore let every arm of government be the change we want to see in our country.

23.  Once again, I congratulate the Presidential Advisory Committee Against Corruption and the National Judicial Institute for their collaboration and initiative.

24. I look forward to the outcome of your deliberations which I believe will serve as a veritable input to our collective effort in killing corruption before it kills Nigeria.

25. Thank you for your kind attention.