Breaking: Terrorists Killed As Troop Ran Into Ambush, Some Missing In Action 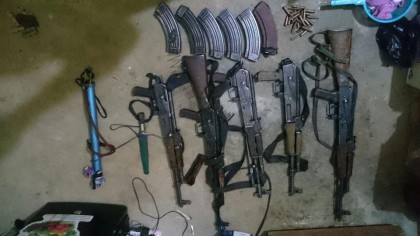 Sani Kukasheka Usman, Abuja: This morning, troops on clearance patrol at Guro Gongon village and environs to rout out remnants of Boko Haram terrorists hibernating therein, destroyed the terrorists’ makeshift camps and recovered quite a number of weapons, equipment and foodstuff in the process.

However, the gallant soldiers basking on the recorded success, returning to their defensive locations, ran into an ambush by a group of Boko Haram terrorists who came to reinforce their fleeing comrades. The troops fought back gallantly killing several of the insurgents.

Sadly however, 19 soldiers and 3 civilian JTF members were wounded in action while a few others were missing in action.

The wounded have been evacuated and are responding to treatment, while a search and rescue party comprising of Special Forces personnel has since been dispatched to establish contact with the missing in action troops, some of whom, as at the time of filing this report, have started returning to their defensive location.

It is pertinent to state that, no stone would be left unturned until every person involved in the operation has been accounted for.