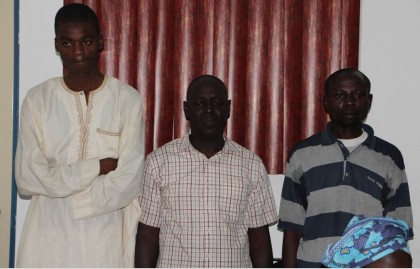 DCP Don N. Awunah, Abuja: On the 1st August, 2016 suspects were tracked, trailed and arrested by Police’s operatives attached to the Inspector General of Police Intelligence Response Team, (IRT) Force Headquarters, Abuja, subsequent to several complaints received from well meaning individuals and highly placed personalities in Abuja of serious threat to their lives, intimidation and attempts to defraud them of huge sums of money.

Exhibits Found are:
(i) A phone (handset) containing the SIM card /number used to threaten the complainant
(ii) Copies of letters of threat to life addressed to highly placed Nigerians
(iii) Copies of letters of fraud addressed to well meaning individuals and cooperate bodies soliciting for monetary assistance for non existing
tragedies and projects.
(iv) List of names and phone numbers /contact of hundred of important personalities in public and private sectors in Nigeria

The syndicate specialises in sending test messages and calling highly placed individuals such as Honourable Ministers, Senators, Governors, Captains of industry etc on phone demanding for huge sums of money or else the victims should await a grievous consequences if they failed to comply. Abdulrahman Shaibu 21 yrs, who is the leader of the gang was arrested during a rigorous and painstaking investigation into the crime. His arrest led to the arrest of Isiaku Maheed Zanbuk ‘M” 47 yrs and Hassan Haruna ‘M’ 35yrs who are also key members of the syndicate.

The three suspects confessed to the crime and explained to the investigators various roles played by each of them in the perpetration of this criminal act and other related crimes they have committed in the past. All the exhibits mentioned above were recovered from their possession. They will be arraigned in Court on completion of investigation.

However, members of the general public are advised to be vigilant and report promptly any threat of this nature to the nearest Police Station.