Atlanta ’96: Nigeria made Olympic history as the first African team to win the gold medal in football 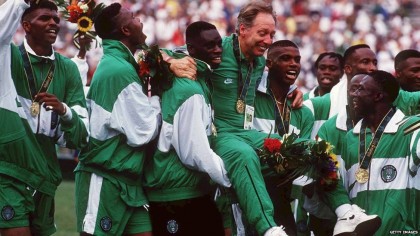 Nigeria made Olympic football history by becoming the first African and non-European and South American team to win the gold medal. While the football tournament remained primarily an Under-23 competition, each of the 16 competing countries were allowed to use as many as three overage players in a compromise between FIFA and the International Olympic Committee.

The Nigerians, whom many observers predicted would be the first African side to win a World Cup, showed so much promise and expectations over the previous decade. They won the 1985 Under-16 World Tournament and finished second in 1987. They took third and second, respectively, at the 1985 and 1989 World Youth Championships. But they could never break the final barrier at the higher levels.

Nigeria, coached by Dutchman Johannes Bonfrere, started their path to the final with a 1-0 victory over Hungary and a 2-0 win over Japan before completing the first round with a 1-0 loss to Brazil. The Africans then shut down Mexico and goalkeeper Jorge Campos, 2-0, in the quarter-finals to set up a pair of amazing matches.
Losing in the semi-finals to a favoured Brazilian side that boasted Bebeto, Ronaldo and Rivaldo, 3-1, Nigeria finally woke up in the 78th minute as Victor Ikpeba scored from 20 meters. As time was running out, captain Nwankwo Kanu took center stage, scoring in a scramble in front of the goal in the final minute to equalize. With extra-time barely three minutes out, Kanu fired home the game-winner from 16 meters to complete one of the great comebacks of international football history and in what many observers felt was the greatest Olympic match ever played. 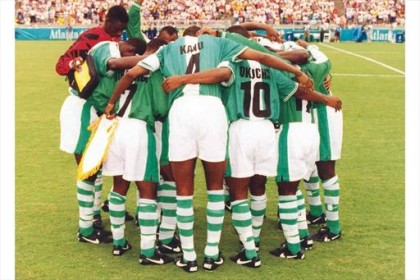 As if trying to top themselves, the Nigerians then staged another miraculous comeback against Argentina in the gold-medal match in front of 86,117 spectators in the Sanford Stadium in Athens, Georgia.

The Argentins held a 2-1 advantage on goals by Claudio Lopez (third minute) and Hernan Crespo (tournament-best sixth goal on a penalty kick in the 50th minute) before the Nigerians equalized on Daniel Amokachi’s shot in the 74th minute. With a minute remaining, Emmanuel Amunike pulled off some 11th-hour heroics as he took advantage of a botched offside trap and beat goalkeeper Pablo Cavallero from point-blank range for the winning goal in a 3-2 triumph. “I guarantee you that as I talk to you now, everyone in Africa is celebrating,” forward Sunday Oliseh said. “There is no sleeping tonight. Everyone will be happy. This is for all the African countries.”

Besides Nigeria, this competition had a number of surprises. Italy, coached by Cesare Maldini, crashed out of the tournament after a disastrous first round. Those results and disappointing performances eventually cost Maldini his job.

Unfancied Japan stunned Brazil in the opening round, 1-0. During a span of several minutes after their 1-1 draw with Mexico, Ghana went through agony and ectasy. They left the field with sullen faces, thinking they had failed to qualify for the quarter-finals. But their faces turned to smiles when Mexican coach Bora Milutinovic told them they had made it.

Brazil, who had won four World Cup crowns but never the Olympic gold, were forced to settle for a bronze medal. The South Americans, spurred by Bebeto’s three goals, strolled to a 5-0 win over Portugual in the third-place match.

Only two years after a successful World Cup, the Olympic Football Tournament proved to be popular in the USA, as it was during the 1984 Summer Games. A total attendance of 1,364,142 witnessed the 32 matches, most games paired as double-headers with the first Women’s Olympic Tournament.