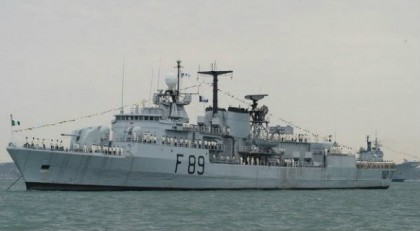 The Nigerian Navy has continued its crackdown on the activities of illegal crude oil thieves and pipeline vandals thus on 10 August 2016, a patrol team deployed by NNS JUBILEE raided an illegal refinery site at Ikoh Imoh Community in Akwa-Ibom State. During the operation, the patrol team destroyed a Cotonou boat laden with suspected stolen crude oil, 103 drums of illegally refined Automotive Gas Oil (AGO) and 2 motorcycles.

Similarly, on 12 August 16 at about 0630, patrol team deployed by NNS DELTA raided several illegal refinery sites along Jones Creek in Delta State. During the raid, the patrol team destroyed un-quantifiable amount of stolen crude oil and illegally refined AGO.

In a related development, the Nigerian Navy Ship NWAMBA on 13 August 16, at about 1000 arrested Marine Vessel (MV) STAR SHRIMPER. The vessel was alleged to have tried to evade interrogation when intercepted by the Nigerian Navy Vessel, with an unclear reason for its action. The vessel and its crew are being investigated.

The Nigerian Navy is therefore reiterating its resolve to eliminate all forms of economic sabotage and criminal activities in the maritime areas.

In a related development, the Nigerian Navy has handed over a suspect, one Grace Nkoyo Nwauzor to the Independent Corrupt Practices and other related offences Commission, ICPC for alleged impersonation and fraud. The Chief Of Naval Staff represented by Commander, Naval Unit says the suspect was arrested at the Navy Town Site in Asokoro, Abuja.