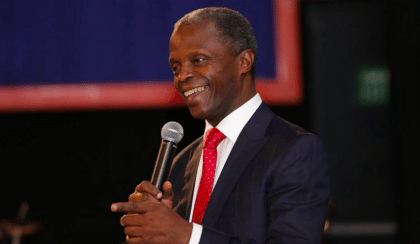 I joined the army early in life and I spent all my professional life in the armed forces of Nigeria. I and so many others were trained to accept, to believe in and to be prepared to die for the security, safety and territorial integrity of Nigeria.

And indeed many of my colleagues and friends gave their lives defending this nation and its great people. We came from every nook and cranny of Nigeria, from the South-South, South-East, South-West, North-East, North-West and North-Central. There were Moslems, Christians, and atheists in our number.

It never mattered where you were from or how you worshipped, we were just Nigerian Soldiers committed to each other and to our Nation, and completely convinced in the words of our old National Anthem, “though tribe and tongue may differ in brotherhood we stand.”

Indeed our Nation today was built on the sacrifices, the supreme sacrifices of many in the forces and outside it. It is, because of the memory of these men and women that we must resist with all we have any attempts by anyone or any group, under any guise to undermine the safety, security, and integrity of our dear Nation.

In the past few years our nation faced the threat of terrorism, characterised by the mindless killing of innocent people, including children. The massacre of the Buni Yadi boys on their beds at night, the bombing of churches, mosques and market places, the kidnap of the Chibok girls and several many others.
The sheer recklessness of the killings, the shocking barbarity of the executions, were meant to terrorise and produce maximum fear. To further establish their reign of terror they took territory and hoisted their tattered flags in almost 27 local governments in the NE.

Sadly because of the disgraceful greed and wickedness of some in government and some in high office in the armed forces at the time, funds meant to equip soldiers to contain the terrorists were embezzled. Their incredible selfishness cost the nation thousands of lives, extended the reign of terror, and strengthened the enemy.

Since May 29 2015, we have committed ourselves as a government to the absolute defeat of the terrorists and to re-equipping and rebuilding the morale of our armed forces. The gallant men and women of our armed forces have in a few months freed many from Boko Haram-held territories and fatally degraded their fighting capacity. Our neighbours in the Lake Chad Basin area have also been tremendous allies in the various military engagements.

But like all evil, the vestiges of their activities and warped ideology still linger. Through personal contact, the social media, and even personal contacts, capture and intimidation, men women and even children are induced, persuaded or forced to engage in acts of terrorism.

This is why a robust and dynamic Counterterrorism strategy is crucial in the fight against terrorism, and must be constantly reviewed for relevance to contemporary challenges.

Today we are gathered to launch such a policy-The Revised Counterterrorism Strategy. That it is a revised strategy underscores the fact that we recognise that terrorism has numerous iterations, it is not static, and our response must be dynamic and versatile.

I am pleased to confirm that this policy is fit for purpose and adequately responds to the current, imminent and future challenges.

There must be an understanding that the war against terrorism is a most unconventional one. The enemy is essentially an insane nuisance because he revels in un-cowardly attacks. He does not obey the rules of warfare, kills the defenseless including prisoners, uses children as human guns and considers the killing of anyone at all as a victory.

As we think through our strategy, we must remember that to permanently win the physical battle, we must win the battle of the minds of the often impressionable young men who sign up to join Boko Haram. We must also educate the millions of other young men, through the leadership of our faiths.

We must let them know that Islam or any other religion we know, does not endorse the slaughter of any one. That any one who kills the innocent and shouts that God is great either does not know the meaning of those words or is deranged. We must work hard to provide opportunities for these young men and women who for years have lacked education and a real chance of doing well.

Our Social Investment Programmes and Home-Grown School Feeding Programme, our vocational and technical training for graduates and non-graduates, our Teacher Corp programme are all designed to create real opportunities for young people.

Today as hundreds are being released from Boko haram captivity, we are faced with a serious problem of malnutrition in children. Thousands are at risk. I have asked the Vice President to Chair an inter-ministerial team to quickly review the situation and work with our development partners and other CSOs to handle this particular problem.

The government is determined to ensure that the safety and security of every single Nigerian is our priority. This is why I have repeatedly ordered our law enforcement agencies to ensure that perpetrators of violence in any shape or form are arrested and made to face the law.

The activities of armed herdsmen and host farmers, kidnappers, and criminal militants all threaten our peace, security and the stability of our nation. We will not allow any one under any guise whether it is politics, culture or religion to violate the physical person, lives or property of other citizens. This is the oath to which I swore and I will uphold it at all costs.
Distinguished Guests, Ladies and Gentlemen, achieving success in combating the menace of terrorism is contingent on a well-articulated strategy and effective Counterterrorism coordination, with all stakeholders knowing and playing their roles well and devoid of inter – agency rivalry.

I therefore take this opportunity to commend the NSA and his team as well as other MDAs who worked tirelessly to ensure the development of this document.

In this regard, MDAs must henceforth respect and adhere to their respective roles as stipulated in the strategy and complimentary documents.

On this note, it is my honour and privilege to launch this document, the revised edition of the National Counter Terrorism Strategy.

May God Almighty continue to Bless the Federal Republic of Nigeria.

Thank you for your attention.