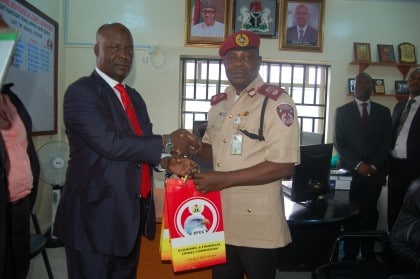 Wilson Uwujaren, Abuja: The Assistant Corps Marshal and Zonal Commander of the Federal Road Safety Corps, FRSC Zone 6, Jonas Agwu has pledged the support and cooperation of the FRSC to the Economic and Financial Crimes Commission, EFCC. He made the pledge on Wednesday, August 24, 2016, while paying a courtesy visit to the Port Harcourt Zonal Office of the Commission.

Agwu who was accompanied by the Zonal Protocol Officer, Route Commander, Charles Isaiah and Elizabeth Asuquo called for a synergy between the FRSC and the EFCC in the area of information sharing. The Zonal Commander stated that the mandate of both Agencies was to save lives and enhance the development and growth of the nation , The EFCC, he says, is restoring integrity to Nigeria as a nation while FRSC is restoring sanity to the nation’s roads.

According to him, the purpose of his visit was to build on the existing relationship between the two agencies while pledging the support of the FRSC for the EFCC in carrying out the onerous task of restoring integrity to the nation through its fight against corruption. 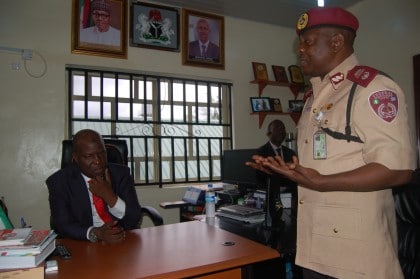 In his response, EFCC’s Zonal Head, South-South, Ishaq Salihu expressed his appreciation to Agwu for his kind words and commendation. He said the EFCC will not relent in its fight against corruption and economic and financial crimes.

He noted that for corruption was largely responsible for high carnage on our roads. He also drew a link between capital flight and stolen money resulting in bad road works and high carnage on the highways. He commended the FRSC in its effort to restore sanity on the roads.

He drew the attention of the commander to Section 7 of the Commission’s Establishment Act which gives the Commission the right to investigate people suspected to be living above their means. He stated that there was need for timely information about the registration of exotic vehicles as it will help in tracing stolen funds.