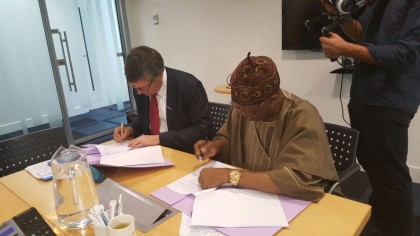 The Minister of Information and Culture, Alhaji Lai Mohammed, on Wednesday signed an MoU with the Chief Executive of the British Council, Sir Ciaran Devane, with a request for partnership to help train festival managers, revive the country’s major festivals and prevent its traditional games from dying.

The agreement was signed in Edinburgh, Scotland, on the sidelines of the ongoing 2016 Edinburgh International Festival Summit.

The Minister described the MoU as the height of the “spirit of cooperation that has taken us thus far”, saying however that it must put more emphasis on substance rather than form

“We need to have a work plan that will enable us to measure achievement year by year,” he said. “An MoU that does not achieve visible results is not worth its while.”

Alhaji Mohammed said the challenge facing the sector is how to ensure that it transits from creative industry to creative economy.

Alhaji Mohammed said the country is interested in capacity building for festival managers with a view to changing its festivals from mere fun events to business.

He said Nigeria is particularly keen to revive such grand festivals as the Durbar and Argungun, which have not been held for some years, as well as to prevent such traditional games like ‘ayo’ from dying, because of their importance in teaching sportsmanship and promoting tolerance.

In his comments, Sir Ciaran expressed his delight at the partnership between the Ministry and the British Council.

“The British Council is delighted to assist in any way we can” to take the partnership further, Sir Ciaran said.

Apart from the British Council, the Ministry also plans to sign a similar cooperation agreement with the Tony Elumelu Foundation.