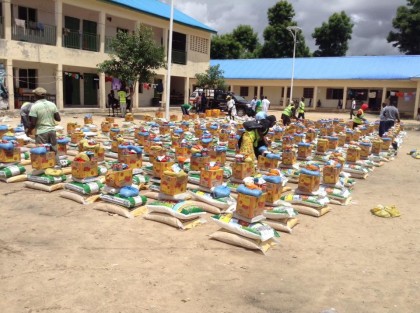 Sani Datti, Maiduguri: A total of 55, 950 bags of rice, 30, 214 bags of maize and others assorted food and non food items were handed over to the Borno State Government by the National Emergency Management Agency (NEMA) for distribution to various Internally Displaced Persons (IDP) camps in Maiduguri between February and July this year. 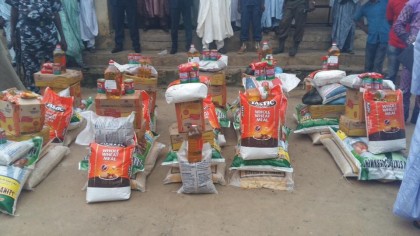 The last tranches delivery of relief items to the state government was on Tuesday 12/7/2016 when the North east zonal coordinator of NEMA, Mohammed Kanar, handed over 8, 000 bags of rice, 3200 bags of beans, 1000 bags of millet and 1, 200 bags of maize to the Borno State Emergency Management Agency. The next delivery is this week, once the supplies are completed.

This month (August), the agency delivered additional 3,100 bags of rice, 3000 bags of beans, 1850 bags of Guinea corn, 650 bags of millet and 1200 bags of rice (50kg) in the few days based on request from the state government to augment the regular supplies which were presented to the SEMA Chairman, Ahmed Satomi, and Chairman Monitoring/ Distribution of Relief Items to IDPs in Borno state, Alhaji Mohammed Sani.

Similarly, NEMA has delivered relief materials directly to the IDPs in the satellite camps and IDPs camps in Maiduguri, comprising of 4, 367 bags of rice, 1, 330 bags of beans; 1, 508 bags of millet, 2, 600 jerry cans of vegetable oil, 100 jerry cans of palm oil, 46 cartons of milo beverage, 150 cartons of tomato paste and 1, 850 pieces of nylon mats from March to July. 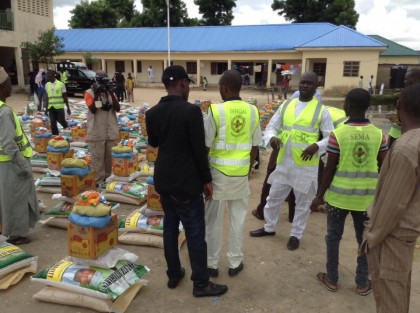 In addition to the humanitarian intervention in Borno State, the agency has also been unwavering in its commitment to the provision of supports to IDPs in Yobe, Adamawa states and other locations across the country.

The MoU stipulate amongst others that NEMA supplies raw food to IDPs while the Borno state government provides additional condiments and maintains the camp environment. There are 113, 398 IDPs living in 13 camps in Maiduguri town and its environs. The satellite camps have 306, 380 IDPs located in 16 liberated communities and towns.

A part of coordination role, the agency has been collaborating with other organizations in carrying out medical outreaches to the IDPs in the camps as well as providing medical consumables for camp clinics and referral hospital within Maiduguri.