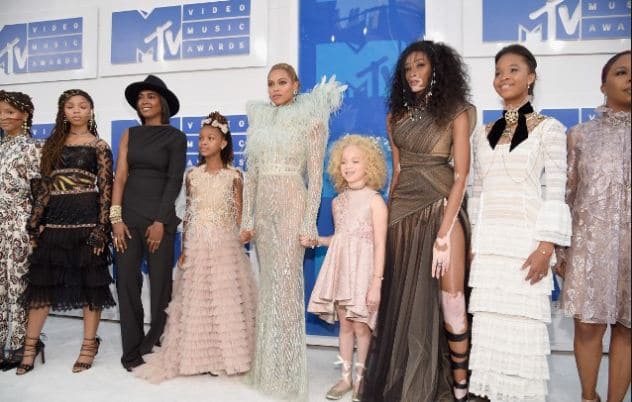 With 11 nominations, Beyounce was the most nominated artist at the MVA with “Hello” superstar Adele as second with 8 nominations.

The Hip pop singer showed off in her winged dress, alongside daughter Blue Ivy, on the red carpet.

She performed her hit song lemonade before making a return on stage to collect her Moonman for “Hold Up” and seven other statuettes. 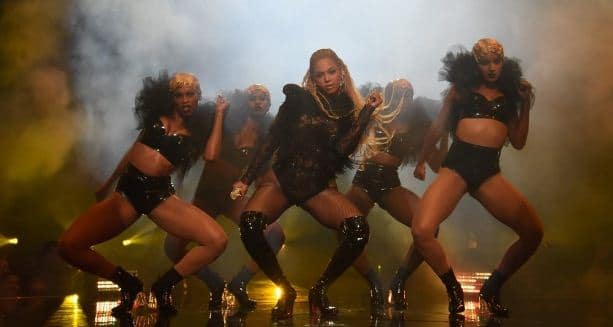 Beyoncé is now tied with Madonna and Taylor Swift for the most wins in the Best Female Video category — each of them now have three (Bey previously won for “Crazy In Love” and “Naughty Girl”).

She kept it short but sweet, giving a warm “thank you” to director Jonas Åkerlund, to MTV, and to her legions of adoring fans. 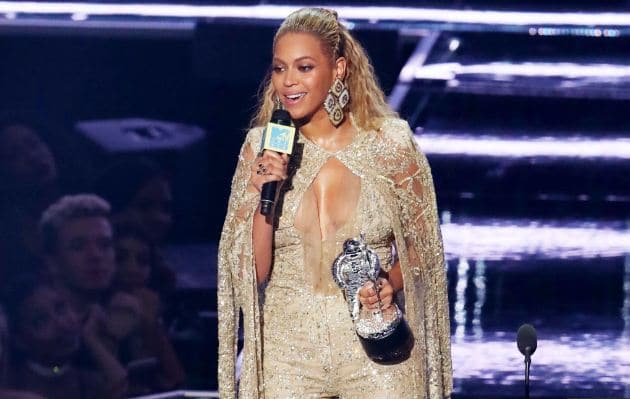 She has now won 24 MTV awards, altogether, a record by any artiste.

On a night when women ruled, Britney Spears returned to the VMA stage for the first time in a decade, and Rihanna performed four times to mark her lifetime achievement award.

But Beyonce dominated proceedings, bringing the house down at New York’s Madison Square Garden, stringing together five of her “Lemonade” album tracks about betrayal, revenge and female empowerment in a song and dance routine that brought a long standing ovation.

Beyonce with daughter Blue arriving for the MTV awards
VMA organizers had announced only three hours before Sunday’s show began that Beyonce would perform. The singer arrived on the red carpet accompanied by the mothers of three African-American men who have died at the hands of U.S. police in the past two years.

She also won best female video and prizes for choreography, editing, and long form video in the awards that are voted on by fans.

Where Beyonce was angry and bold, Spears, 34, dressed in a sparkly gold leotard and matching over the knee boots was slinky retro pop. It was the “Toxic” singer’s first time on the VMA stage since her humiliating 2007 performance when her personal and professional life was falling apart, and follows the release of a new album last week.

Rihanna, 28, sang 13 of the biggest hits in her 13-year career, including “Rude Girl,” “Diamonds” and “Only Girl in the World.” She was presented with the Michael Jackson Video Vanguard award by Canadian rapper Drake – with whom she has often been romantically linked.

“She’s someone I’ve been in love with since I was 22 years old. She’s one of my best friends in the world. All my adult life, I’ve looked up to her even though she’s younger than me,” said Drake.

Kanye West, who has often hijacked the live VMA show, presented a new video for his single “Fade.” West preceded the video with a rambling, improvised speech that touched on poverty, his wife Kim Kardashian, his long-running feud with Taylor Swift, and violence in black neighborhoods.

“We are undeniably the influencers, the thought leaders,” he said, before screening what he called a “piece of my art.”

Many of pop music’s biggest names, including Justin Bieber, Britain’s Adele and Taylor Swift were absent on Sunday.

VIDEO OF THE YEAR

Ariana Grande – “Into You”

Winner: Calvin Harris ft. Rihanna – “This Is What You Came For”

Calvin Harris ft. Rihanna – “This Is What You Came For”

Ariana Grande – “Into You”

Winner: Fifth Harmony featuring Fetty Wap — “All In My Head”

Calvin Harris featuring Rihanna — “This Is What You Came For”

All Time Low – “Missing You”

Coldplay – “Adventure Of A Lifetime”

Panic! At The Disco – “Victorious”

Winner: Calvin Harris & Disciples – “How Deep Is Your Love”

Mike Posner – “I Took A Pill In Ibiza”

Florence + The Machine – The Odyssey

Missy Elliott ft. Pharrell – “WTF (Where They From)” (Choreographer: Hi-Hat)