Boko Haram will Meet Its End in Weeks – Lucky Irabor 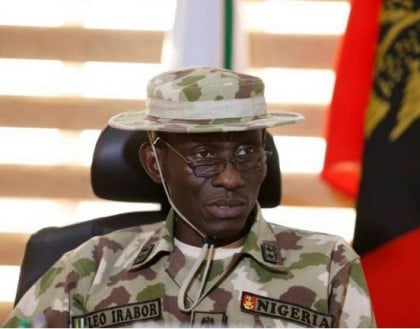 Major General Lucky Irabor, the Nigerian Army’s Commander in Charge of the Operation Lafiya Dole Anti-Boko Haram Counter-Insurgency mission, said on Wednesday that the Nigerian Army expects to seize Boko Haram’s last few strongholds in the northeast over the next few weeks, and absolute victory over the militant Islamist group ahead of a December deadline.

“Almost all of the locations held by the Boko Haram terrorists have been reclaimed. We are talking only of a few villages and towns,” Irabor said, adding that the anti-Boko Haram coalition made up of Nigeria, Cameroon, Niger, Chad and Benin helped in the fight against the militants.

Despite the set-backs, Boko Haram still manages to stage regular suicide bombings in Nigeria and neighboring Chad, Niger and Cameroon. Since 2009, more than 15,000 people have been killed, 2.3 million displaced and the local economy decimated.

Much of the success is down to better military cooperation with Nigeria’s neighbors, especially Chad, whose forces have been attacking Boko Haram fighters fleeing across the border.

“Earlier on this year we had a major operation in the Sambisa,” he said. “Gains were made but unfortunately the weather conditions became such that we had to pull out waiting for more favorable conditions.”

He said the army had rescued some 20,000 people from Boko Haram, a fraction of the 2.2 million UNICEF said last week remained trapped in the region around Lake Chad.