Smart-Policing Is The Way Forward In Fighting Crime – Osinbajo 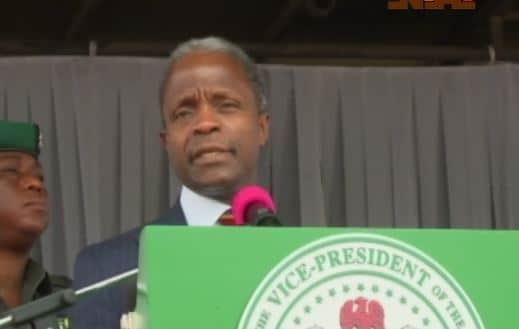 The Vice President, Prof. Yemi Osinbajo on Thursday performed the foundation-laying of the Nigeria Police Force Crime and Incident Data Base Centre in Abuja urging the force to embrace smart policing.

He said that the administration was ready for smart policing as that was the only way the police could outsmart criminals and ensure protection of lives and property.

According to him, criminals are using all available technology to carry out their operations while only a technology-driven crime prevention and detection mechanism could halt their advancement.

“I think that one of the most important things that this crime and incident data centre will do is to equip the police to be able to do the kind of investigation that is required to cope with crime today.

“Practically everybody knows that the criminal today is very well equipped.”

Osinbajo observed that due to modern technology anyone who wants to be criminally inclined or who is criminally minded has the equipment today to do a lot of damage.

Accordingly he said that the police have absolutely no choice but to ensure that they are up to scratch and ahead of the criminal in every way.

He said police duty had been made much easier because the technology to use was available and relatively cheap.

Osinbajo said that other people in different parts of the world today were no longer doing manual investigation because there was a lot of information available.

He announced that the federal government was already working on a programme of unifying all existing data bases, especially information on Nigerians everywhere.

“We have Bank Verification Number (BVN); we have information from NIMC (National Identity Card Management Commision).

“We have information from INEC (Independent National Electoral Commission), we have practically about four or five data bases that contain enough information about everybody.

“So it will be important for us to ensure that all of those data bases are able to speak to each other and that we are working from a unified data base.

“With that data base, there is already a lot that you can use in order to be able to find out whatever that one needs to find out before the criminal or forensic profiling that this crime and incident base information system will provide.’’

He said the centre would be “an incredibly useful tool in smart policing’’ adding that with it government expected to see a much revitalized police force carrying out faster investigations.

The Vice President described the Nigeria Police Force as one of the very best and educated in the World having proved its mettle in national and international missions.

He, however, admitted that nation’s force performed creditably in mission operations because they were exposed to better training and education as well as modern and more sophisticated equipment.

Osinbajo said that for about eight years he served as Attorney-General in Lagos state he worked very closely with the police.

He said he realized then “that we had possibly some of the best minds in Nigeria in the police force at the high level, the middle level and the lower levels.

“The issue has always been good equipment and a good enough welfare package for those who serve in the police force.

“And of cause with good equipment and welfare one would expect commitment and some imagination also in the way that policing is done.’’

Osinbajo reaffirmed the support of the Muhammadu Buhari administration to Nigeria police and his desire is to build a police force that is the envy of the world.”

Acting Inspector-General of Police, Ibrahim Idris, said the erection of the N6 billion facility would bring the force’s operations to international standard in view of the sophistication of criminality in all spheres.

Idris said the data base centre was long overdue considering the myriads of challenges that characterized manual form of police crime and incident registers “which have become obsolete and moribund’’.

The Chairman of Senate Committee on Police Affairs, Sen. Abu Ibrahim, and that of the House of Representatives, Rep. Haliru Jika, pledged the support of the National Assembly to enhance the operations of the police.