Will Malnutrition be Permanent in Nigeria? 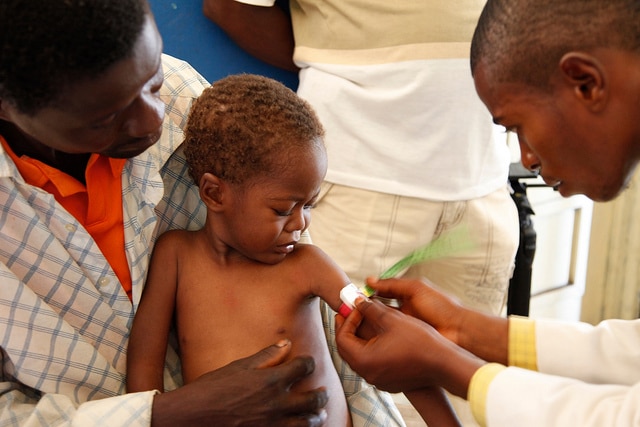 LAST week, reports of cases of malnourished children at the Internally Displaced Persons, IDPs, camps in Borno State, caused a stir. Footages of persons in the camps suffering from acute malnutrition, were displayed by the   Doctors without Borders- (Médecins Sans Frontières), MSF. The photographs were accompanied by reports that an average of eight children were dying daily from malnutrition in the state.

Malnutrition is a permanent feature within the nation’s health sector. It is a silent crisis raging in the country. Findings reveal that in Nigeria, malnutrition remains a great challenge, particularly for mothers and children because it contributes to the deaths of about half a million children each year – or about 1 out of every 2 child deaths Malnutrition is a condition that occurs when people consistently do not consume or absorb the right amounts and types of food and essential nutrients. The main indicator of childhood malnutrition is stunting — when children are too short for their age. Stunted children have poor physical growth and brain development, preventing them from thriving and living up to their full potential. With over 11 million stunted children, Nigeria is facing a crisis of malnutrition and ranks second behind India among all countries with the highest number of stunted children. Malnutrition among Nigeria’s children is a serious problem throughout the country. Each year about one million Nigerian children die before their 5th birthday. The rates of stunting have stagnated for more than a decade. About 2 in 5 Nigerian children are stunted, with rates of stunting varying throughout the country Worse still, almost 30 percent of Nigerian children are underweight, meaning they don’t weigh enough for their age. This is more than double the proportion of neighboring Ghanaian children who are underweight. The percent of children in Nigeria who are wasted, or too thin for their height, steadily increased over the last decade, rising from 11 percent in 2003 to 18 percent in 2013. Health experts say the first 1,000 days represent a critical window of opportunity. They say adequate nutrition during this period can avert malnutrition by ensuring that children have the best possible opportunity to grow, learn, and rise out of poverty. Head, Nutrition, Federal Ministry of Health, Dr. Chris Osa Isokpunwu, described a child’s nutritional status as the reflection of overall health and a cornerstone for survival, health and development. “Malnutrition among Nigeria’s children is a serious problem throughout the country. Isokpunwu declared, explaining that an undernourished child has lower resistance to infection and is more likely to die from illness. In addition to increasing mortality risk, poor nutrition in the first two years of life leads to stunted growth, which is irreversible and associated with impaired cognitive ability and reduced school and work performance. The global target is to reduce stunting by 40 percent and maintain wasting below 5 percent by the year 2025. Stunting and wasting In an investigation of the three key indicators for monitoring the nutritional status of a child under 5 years of age – underweight, stunting and wasting, data from the Summary of Findings of National Nutrition and Health Survey conducted from 9th February to 5th May, 2014, indicated that the country has a stunting prevalence of 32 percent among children under 5 years of age; while about 21 percent and 9 percent are underweight and wasted respectively. Report of a survey, titled  “Malnutrition: Nigeria’s Silent Crisis,” presents the reasons why proper nutrition for women and children is so important, especially in the first 1,000 days from the start of a woman’s pregnancy until her child’s second birthday. The survey notes as a sad commentary that the rates of stunting in Nigeria have stagnated for more than a decade. About 2 in 5 Nigerian children are stunted, with rates of stunting varying throughout nationwide. Among factors that contribute to Nigeria’s ongoing struggle with malnutrition include lack of adequate information by parents and caregivers who are not well-informed about appropriate feeding practices and have little understanding about the essential types and varieties of foods that children require to grow up healthy. Without aid, 49,000 children will die this year in northeast Nigeria – UN

According to Reuters report in Lagos, nearly half a million children around Lake Chad face “severe acute malnutrition” due to drought and a seven-year insurgency by Islamist militant group Boko Haram in northeastern Nigeria, UNICEF said on Thursday.

Of the 475,000 deemed at risk, 49,000 in Nigeria’s Borno state, Boko Haram’s heartland, will die this year if they do not receive treatment, according to the United Nations’ child agency, which is appealing for $308 million to cope with the crisis.

However, to date, UNICEF said it had only received $41 million, 13 percent of what it needs to help those affected in the four countries – Chad, Nigeria, Niger and Cameroon – that border Lake Chad.

At the start of 2015, Boko Haram occupied an area the size of Belgium but has since been pushed back over the last 18 months by military assaults by the four countries.

Most of its remaining forces are now hiding in the wilds of the vast Sambisa forest, southeast of the Borno provincial capital, Maiduguri.

UNICEF said that as Nigerian government forces captured and secured territory, aid officials were starting to piece together the scale of the humanitarian disaster left behind in the group’s wake. “Towns and villages are in ruins and communities have no access to basic services,” UNICEF said in a report.

In Borno, nearly two thirds of hospitals and clinics had been partially or completely destroyed and three-quarters of water and sanitation facilities needed to be rehabilitated.

Despite the military gains, UNICEF said, 2.2 million people remain trapped in areas under the control of Boko Haram – which is trying to establish a caliphate in the southern reaches of the Sahara – or are staying in camps, fearful of going home.

Boko Haram is thought to have killed as many as 15,000 people since the launch of its insurgency in 2009.

Responding to its battlefield setbacks, Boko Haram has turned to suicide bombings, many involving children.

UNICEF said it had recorded 38 cases of child suicide bombings so far this year, against 44 in the whole of 2015 and just four the year before that.

DAKAR, Senegal (AP) – Nearly half a million children in areas affected by Nigeria’s Boko Haram insurgency could suffer from severe acute malnutrition this year, a figure that has more than doubled since the beginning of the year, the United Nations children’s agency said Thursday.

Years of conflict have aggravated malnutrition in a region that was already one of the poorest in the world. In Nigeria’s northeastern Borno state, 49,000 children “will die if they do not receive treatment,” the agency, known as UNICEF, said in a report.

Boko Haram’s seven-year insurgency has killed more than 20,000 people and displaced more than 2.6 million in Nigeria and neighboring Cameroon, Niger and Chad, where the extremists have extended attacks in recent years.

An additional 2.2 million people, over half of them children, are feared to be trapped in areas under the control of Boko Haram, the U.N. said.

The agency said it has received just 13 percent of the $308 million needed to help families affected by violence in the region.

The countries surrounding Lake Chad are all contributing to a multinational force to combat Boko Haram, making recent gains against the insurgents who pledged allegiance to the Islamic State group last year.