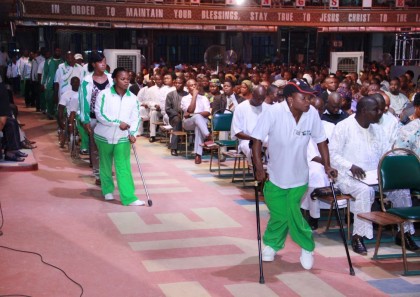 The 35 member contingent departed Abuja on Sept.1. The Nigeria’s contingent to the 2016 Paralympic Games has arrived in Rio, Brazil.

News Agency of Nigeria report that 23 athletes will represent Nigeria in the games where six of the athletes will feature in Para- Athletes, 14 in Para-Power-lifting, while the remaining three will take part in Para-Table tennis. The athletes are with 12 officials, including coaches, medical personnel, helpers, loaders and team administrators, accompanied the team.

Anibeze said that the minister had urged the team before its departure, to compete fairly and be of good behavior at the games.

“I bring you warm greetings from the father of the nation, President Muhammadu Buhari.

“Mr President sends his goodwill and encouragement which is reduced to, “Go and make Nigeria proud.’’

“I congratulate you for qualifying for the games at a time the country is undergoing trials.

“One thing that amazes me about you is your determination, commitment and patriotism.

“As you go for the games, compete fairly, honestly and give it your best,’’ Dalung was quoted as saying during the departure ceremony.

The minister also urged the athletes to comfort themselves and allow officials accompanying them to resolve any crisis that may arise.

“Whatever problems you may encounter, let us manage it very well, the idea of escalating our problems does not speak well of us as Nigerians.

“We at the Ministry of Youth and Sports have resolved that any athlete, who goes out to represent Nigeria, will receive his or her bonus directly.

“All allowances will be paid to you before the games end,’’ Dalung said.

Lucy Ejike, the Team Nigeria captain, had thanked Solomon Dalung and the Permanent Secretary both of ministry of sports, for making it possible for the country to be at the games.