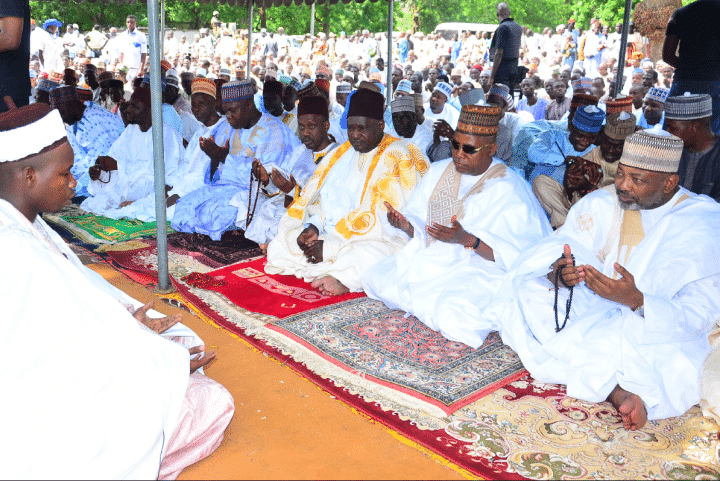 Borno state Governor, Kashim Shettima alongside the Director-General, National Orientation Agency, Dr Garba Abari on Monday observed Eid prayers in Konduga town which was one of the territories controlled by Boko Haram insurgents since 2014 when residents were murderously attacked and had to flee the town for their dear lives.

The insurgents had serially bombed public buildings including hospitals, schools, council secretariats, markets and private houses, forcing residents to flee and remained out for two years.

With the coming of President Muhammadu Buhari however, the Nigerian Military took full control of the town early this year with Borno State Government embarking on reconstruction of public buildings which paved way for the return of hundreds of IDPs back to Konduga barely two weeks ago.

Shettima was in Konduga to show solidarity to the returnees on the Sallah day. He was said to have departed Maiduguri at about 8:55am and arrived Konduga 9:45am in company of top Government officials including the D-G, National Orientation Agency, Dr Garba Abari, Senator Baba Kaka Bashir Garbai representing Borno Central, Senator Abubakar Kyari, representing Borno North, the Speaker, Borno Assembly, security heads, State Assembly members, Commissioners and other officials for the Eid prayers.

The Governor was received by the council Chairman Audu Ladan and the district Head of Konduga, Alhaji Zanna Masu Yale at an Eid ground located along the District Head’s palace in Konduga township amidst a large turn out of former IDPS who returned to Konduga two weeks ago.

The two raka’ats (Eid prayer) was led by the Imam Eidaini of Konduga, Imam Goni Lawan who later, symbolically slaughtered his Ram in the presence of Governor Shettima to pave way for other worshipers to slaughter theirs. 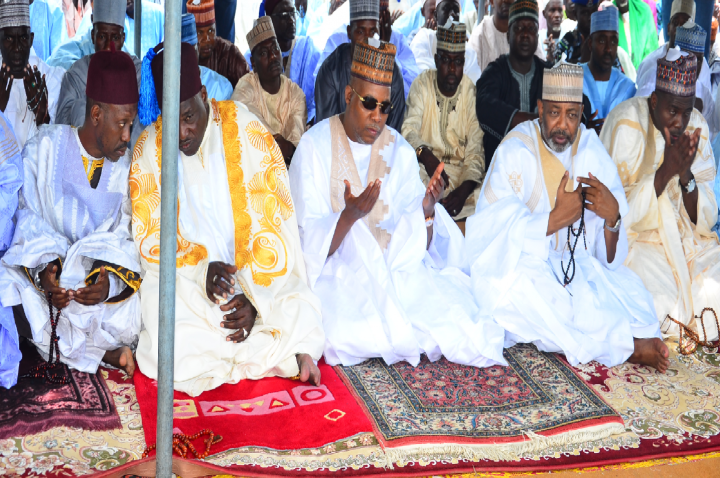 Governor Shettima explained his decision to mark the Eid prayers outside Maiduguri, the first time any sitting Governor would do that.

The Governor said that his visit to Konduga is a mere symbol in the instance which represents all the communities where the citizens have returned.

“We are here in solidarity with them, to celebrate the Sallah with them, to strengthen the fact that they are no less important than those who were not affected by the insurgency, to reaffirm our commitment to resettlement of IDPS.” He added.

According to him, the government wouldn’t have allowed them to return to Konduga if  the area was classified unsafe and that he and his entourage were in the town to reassure residents that it is now safe.

“We will continue to dedicate ourselves to supporting our security establishments, the civilian JTF and hunters to sustain the peace we have but while we do that, we will insha Allah pick up the pieces of our lives.” Shettima said.