A Solo Move Gives A Blind Footballer An Incredible Goal 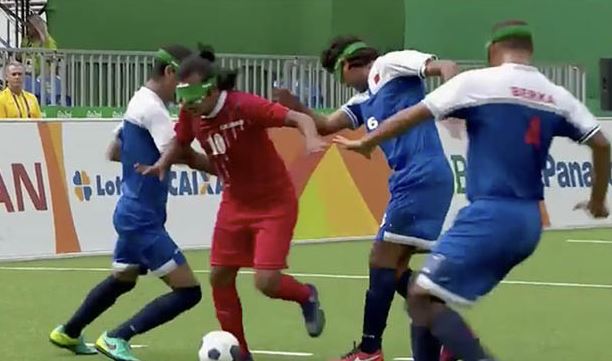 The Rio 2016 Paralympic Games is experience outstanding performance from athletes and players in their respective field of play.

little piece of footage went viral and reports a beautiful solo goal scored by a visually impaired Iranian football player in the 5-a-side match between Iran and Morocco at the Paralympic Games which everyone can bear witness that this can be posed as a herculean task even to the Sighted.

Iran’s Behzad Zadaliasghari dribbled pass three Moroccan players with the ball from the touchline before shooting a bullet that past the Morrocan goalkeeper.

The 5-a-side competition allows all outfield players that are visually impaired and are supposed to wear shades to make them completely blind.

The ball has a noise-making device inside it which aids the players in following the ball and it is the coaches and the goalkeepers who shout out the instructions to their outfield players to follow.

The only two players on the pitch that are visually okay are the both goalkeepers of the competing teams.

Many media reports compared the goal to Barcelona’s Messi’s goal scoring style of dribbling more than one defender before putting the ball in the net.

The match ended in favour of Iran as the beat Morocco 2-0 topping the group, they will face Brazil in their final round match.

The two top teams from each group will qualify for the semifinals of the game.

😱 ⚽️ 👏 Impressive goal on the #Football5 field at the #Rio2016 #Paralympics pic.twitter.com/oW7dadTlR0