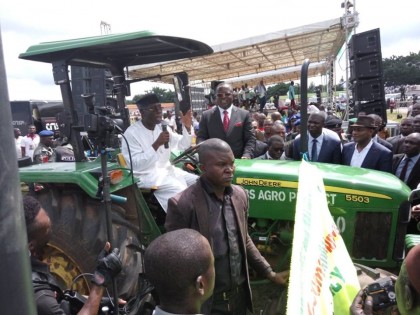 Aishat Ayijimoh Onusi, Abuja: Hon. Minister of Agriculture and Rural development – Chief Audu Ogbeh has dismissed news report quoting him as saying “Nigerians eat too much rice, that’s why it is expensive.”

“This is totally false, misleading and a sheer display of irresponsible journalism, reckless sensationalism, and poor ethics,” the minister said. He noted with disappointment that the mischievous headline in question was completely at variance with the content of the news story.

The Minister decried the deliberate misinformation by the media which has become a frequent occurrence and calls for caution, self-censorship and ethical compliance by journalists and social media activists.

For the avoidance of doubt, the minister stated that during a recent meeting he held with an indigenous Agro Company investing in the production of Irish Potato in Nigeria, he did talk about the health risk associated with the excessive consumption of rice and advised Nigerians to occasionally substitute rice with potato for improved diet.

Chief Ogbeh wondered how the statement attributed to him in the headline came about when no supporting statement or quote was provided in the content of the news report.

He advised Nigerians to beware of misleading headlines; pay close attention to media reports that come with such and should challenge the Press to abide by their professional ethics.