Why We Carter For Families of Boko Haram Fighters 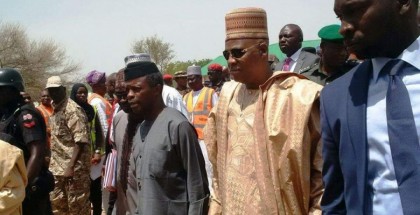 Isa Gusau, Maiduguri: Borno Governor, Kashim Shettima on Friday explained basis for administration’s continued care for families of Boko Haram insurgents, noting that the aim is to break the Boko Haram cycle of violence and secure the future of Borno State.

Shettima gave the explanation on Friday while receiving 355 breastfeeding children babies, 149 breastfeeding mothers and 62 under-aged evacuated by the the Nigerian Army from camps operated by Boko Haram insurgents in different parts of Borno State. Majority of the the 566 persons are believed to be families of the insurgents saved after the military took over the camps during operations. It was the fourth time he received such families and detained suspects freed by the military.

The General Officer Commanding the 7th Division of the Nigerian Army in Maiduguri, Brigadier General Victor Ezugwu handed over the the 566 children and adults to Governor Kashim Shettima at a rehabilitation and reintegration center ‎newly opened by the Borno State Government in Maiduguri to give medical care, education and cater for the welfare of the families. The Government is working in partnership with the UNICEF, NEMA, security agencies and other stakeholders in the rehabilitation and reintegration program. 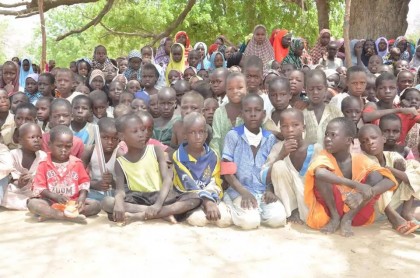 Shettima said at the event: “‎What is of importance we should all know, is that an average male member of the Boko Haram has one great wish and that wish is for his son or daughter to inherit his doctrine of violence.

The insurgents seriously take to child bearing as a strategy of not only multiplying their numbers but also producing children they hope, will continue from where their fathers stop in violent killings as their own form of worship.

The goal of Boko Haram fathers is that even if they are killed by our armed forces, they want to bequeath to us, a future of violence in Borno State, a future of violence in the northeast and a violent future for our country. Our ultimate aim in taking custody of families of insurgents is to cut the cycle of violence so as to secure the future of Borno State. Our aim is to give education to the children of the insurgents so that these children will grow to despise the values and doctrines their parents lived and preached. The children will not be trained with any element of hate for their parents, they won’t even be told about the ways of their parents so that they don’t grow with deflated self esteem. These children will be raised like every other child, they will be raised to love and not to hate like their parents wished for them. They will be trained to safe lives and contribute to building and growing communities not to take lives and destroy communities like their parents would wish. 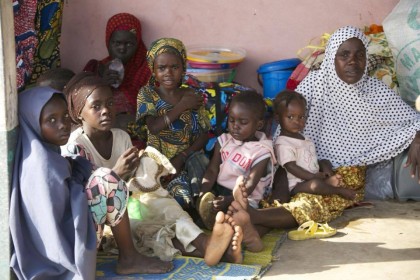 This is why we are determined to take care of these children. I am speaking in English knowing that they don’t hear what I am saying because we don’t want them to have low self esteem. We will train them to have big dreams and to pursue their dreams of becoming productive citizens. Some of these children will be future leaders, many will be doctors, Engineers, lawyers and some may even grow to join the military if they choose to. They will insha Allah, contribute to nation building and part of the future of Borno State. We must love and care for each other. We have witnessed so much hatred and violence. Our hearts have been too consumed by agony. We must use the remaining space in our hearts to love and to share love and brotherhood”.

The Governor also explained that majority of the family members have been found to be innocent of the violence of the Boko Haram insurgents contrary to the wish of some members of the public who want the sins of insurgents meted on their families.

“There are some part of our citizens that may be raising eye brows whenever we are seen taking custody, loving and caring for families of members of the Boko Haram insurgents whether their widows or their children. I have seen some people criticise us on the social media but I think whoever criticizes what we are doing should be forgiven for making expression out of ignorance on the basis of what we are doing.

In our societies, a lot of women neither know what their husbands do nor do they have control over their husbands. Our security forces do thorough investigation in ensuring that anyone freed is proven innocent of violent activities. As for the children, there are innocent little souls who have got absolutely nothing to do with the sins of their fathers. They didn’t determine their parents, they were brought to life without any prior knowledge of the violence their parents perpetuate” Shettima said.