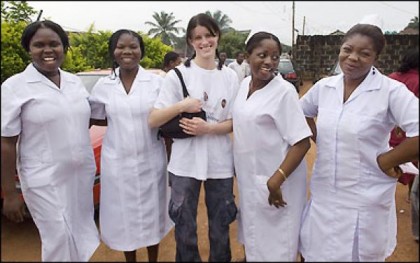 NAN; Nigerian nurses have warned doctors against embarking on their planned strike to avoid compounding the already bad situation in Nigeria. They have to be patriotic.

They said that in the trying period in which the nation found itself, patriotism was required from everyone to solve the crippling situation.

“Embarking on strike will only add to the woes of ordinary Nigerians,” the National Secretary of University Graduates of Nursing Science Association (UGONSA), Mr Goodluck Nshi, said on Monday.

The National Association of Resident Doctors (NARD) had given the federal government a strike notice.

He said the doctors’ action would trample on all ethical values and bastardize the oath of allegiance.

“Such anomalous behaviour is unacceptable and must be stopped,’’ he said.

He said that, “ the oath of allegiance to God and humanity by health workers was sacrosanct and that no reason was good enough for anyone to breach it in the name of strike’’.

Innocent Nigerians, he said, were unnecessarily being punished each time care delivery was disrupted by industrial action.

“It is, to say the least, inhumanity, for anybody to contemplate visiting more hardship on innocent Nigerians that have been significantly crouched by the economic downturn in the country, by grounding healthcare services.

“When the elite have headache, they travel outside the country to get treatment.

“It is the ordinary Nigerians, who do not have the wherewithal to go abroad for treatment that are unnecessarily being punished each time the health sector is grounded by strike.’’
He said that, “we cannot re-create or recover any life lost to strike, we should instead, be all preoccupied with how to help lift the country out of its present economic predicament’’.

The nurses, he said, appeal passionately to NARD to have a rethink of its position.

He commended the “Change Begins with Me” drive of President Muhammadu Buhari, and said the campaign was apt, timely and most needed in the health sector.

“Ethical values have unfortunately been eroded among our healthcare providers such that at the sound of a “strike gong” they throw away their very essence of living, that is, the patient.

“The change must begin with abiding by our sacred oath of allegiance to God and humanity.

“We must develop alternative ways of handling industrial disputes other than embarking on strikes,” he said.

He appealed to the government to be proactive, equitable and prompt in attending to genuine requests or agitation of groups in the health sector to forestall avoidable scenarios.

Governments should not wait until health workers embarked on strike before addressing their issues.