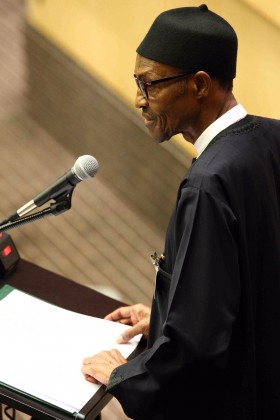 FEMI ADESINA, Abuja; President Muhammadu Buhari Monday in New York said that the anti-corruption campaign of his administration and the economic programme of diversification will significantly address the lack of job opportunities and deprivation that make Nigerian youths vulnerable to recruitment by human traffickers.
The President said this at the meeting on Modern Slavery hosted by the Prime Minister of United Kingdom, Theresa May on the margins of the 71st Session of the United Nations General Assembly (UNGA71), at the residence of the United Kingdom Permanent Representative to the UN.
“We are also investing more on infrastructure development, education and health for our people. When the results of our efforts become manifest the attraction of seeking greener pastures abroad will lesson,” he declared.
President Buhari commended the British Prime Minister for drawing the attention of the international community to such a serious matter to coincide with a time that the global focus is on migration and refugee crisis.
He therefore called for practical and innovative measures “to address all the modern day human tragedies.”
The President noted that “more worrisome is the fact that human trafficking and modern day slavery have created a dangerous political economy of their own. In consequence, this international criminality is defined by the activities of human traffickers that lure unsuspecting victims into forced labour, inhuman treatment, money laundering and prostitution.”
He said Nigeria “is ready and willing to partner with other countries and international organizations to confront this phenomenon. We have a strong commitment to combating the menace of modern slavery, and will redouble our efforts to prohibit human trafficking, while providing succour to its hapless victims.”
President Buhari assured his audience “to count on the support of Nigeria in dealing with this evil, which constitutes an unacceptable stain on human dignity and conscience in the 21st century.”
On measures taken by the country against the evil practice, he said the National Agency for the Prohibition of Trafficking in Persons (NAPTIP) and the Nigeria Immigration Service have taken steps to establish a joint operational Working Group to combat human trafficking and smuggling of migrants from the country.
“We are aware of the challenge for Nigeria, but our resolve to combat it is strong and unshakable,” the President declared.
President Buhari was accompanied to the high-level meeting by Geoffrey Onyeama and Lt-Gen. Abdulrahman Danbazzau (rtd), the Ministers of Foreign Affairs and Interior respectively.