Farming Under Abuja Bridges: An Escape From Vices 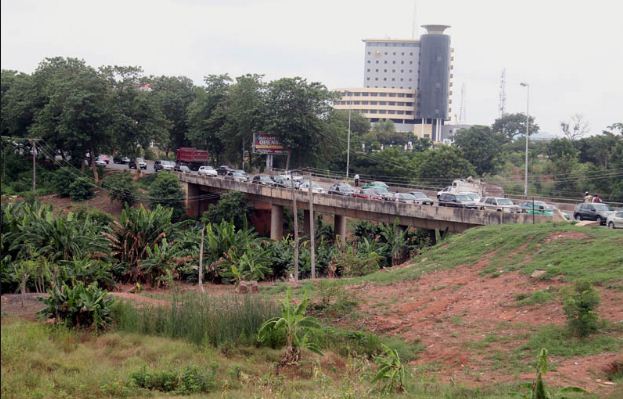 Some of the most beautiful architectural master pieces overlaying the skyline of Abuja can be found in the Central Business District.

It is the area where the brilliant technocrats and corporate business executives and experts operate.

However, there exist a group of persons in the Central Business District who are neither technocrats nor corporate business persons, but have succeeded in carving a productive niche for themselves through the cultivation of the highly fertile tracts of lands around and under bridges in the CBD.

The presence of streams that run all year round aids continuous farming.

The National Mosque Bridge for instance has this long stream stretching from the foot of the Aso Rock running through the city centre and emptying into the Jabi Lake.

33 year old Mohammed Ali from Niger State is employed as a watchman in the national mosque, but has for many years make more than five hundred percent what he earns as a wage from cultivating crops under Abuja bridges.

The farmers are not alone in taken advantage of the areas, artisans and florets also find a haven for their flower seedlings.

While the likes of Mohammed put the area under productive ventures, there some people that use the areas for criminal activities.

Many residents have fallen victims of bag, mobile phones, laptops snatching and robbery.

The Police are however not oblivious of the activities of these criminals. That explains the stationing of teams at such flash points to put criminals out of business.