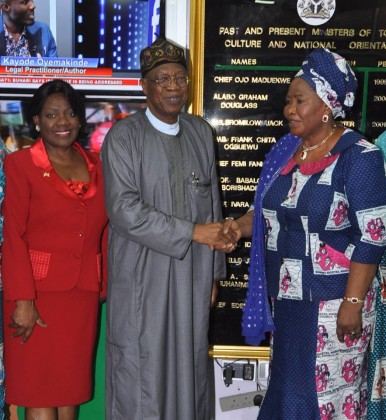 Segun Adeyemi, Abuja: The National Council of Women’s Societies (NCWS) is to partner with the Federal Government to drive the national re-orientation campaign “Change Begins With Me,” according to NCWS National President Gloria
Laraba Shoda.

Mrs. Shoda announced the decision on Tuesday when he led a delegation of the organisation on a courtesy visit to the Minister of Information and Culture, Alhaji Lai Mohammed, in Abuja.

“We crave the indulgence of the Minister to direct the NOA (National Orientation Agency) at the federal and state levels to co-op members of the NCWS during the advocacy campaign, ‘Change Begins With Me’ “This is important to us because a lot of Nigerians tend to view the campaign as having a political undertone,” whereas it is meant to provoke Nigerians to change from negative behaviours and embrace discipline and patriotism; it is meant to be a value added initiative for a better Nigeria,” she said.

Mrs Shoda appealed to the government to set up a special task force to curb the cases of rape and child molestation, which have become rampant in the country.

Responding, the Minister welcomed the support offered by the NCWS and explained that the “Change Begins With Me” Campaign is not meant to put any burden on Nigerians, rather it’s a deliberate effort to change their attitude for the good of the country.

“We are particularly pleased that you have stretched your hand of fellowship to our new campaign ‘Change Begins With Me’. It’s laudable that you want to join us because from the way you spoke, you understand that this ‘Change Begins With Me’ Campaign is about National Rebirth; it’s about going back to those values that made women to be able to bring up their children in a godly manner,” he said.

Alhaji Mohammed said the criticism of the campaign from some quarters stems from misconception, noting that the truth about the “Change Begins With Me” Campaign is that it started from the top to the bottom.

“This government is leading by example, especially Mr. President the Mr. Vice-President and Ministers.This is the least ostentatious cabinet you can ever have. We are all living and showing good examples. We obey traffic rules, queue up at airports and public places; we get to work early and close late,” he said.

The Minister is optimistic that despite the criticism, Nigerians will soon imbibe the tenets of ”Change Begins With Me” Campaign and make it a huge success.

“This campaign is going to succeed. The campaign is not asking
Nigerians to do anything extra, we are not putting any burden on any person. What is our campaign? We are saying Nigerians must first of all resolve that the change we are looking for is in each and everyone of us; that all of us must change what we are doing from the negative to the positive,” he said.

Alhaji Mohammed also assured the delegation that in spite of the economic challenges, the present administration is committed to its Social Intervention Programmes and that the payment of the N5,000 Conditional Cash Transfer to the most vulnerable people in the society will kick off this month, while the process for the recruitment of 500,000 people has also commenced.

The NCWS, an umbrella body of women’s societies in Nigeria, was formed in 1958 to promote gender-related issues.