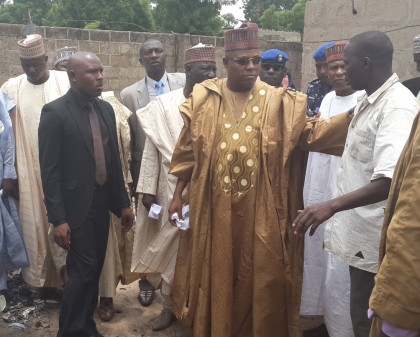 Isa Gusau, Maiduguri: On the second day since relocating his office temporarily to Bama town, Governor of Borno State, Kashim Shettima on Thursday received a six-member delegation from the Denish Refugee Council with discussion focusing on partnership in ongoing reconstruction works and critical support for returning IDPS to speed up their return to agricultural activities and other means of livelihood.

The Denish group was led by the Country Director in Nigeria, Shah Liton whose team flew on helicopter to Bama from Maiduguri for the purpose of meeting Governor Kashim Shettima. The Governor had said any meeting requiring his presence would only be held in Bama town unless where he is summoned by the Presidency or where unforeseen emergencies come up.

The Denish Group met Governor Kashim Shettima at a tent belonging to the 21 Armoured Brigade in Bama during which the visitors offered to help of removing mines planted by insurgents in farm lands and also demanded for other areas of priorities the Borno State Government prefers intervention from the Denish Government.

“We have seen serious destructions here in Bama, we also know that as people prepare to return they will be concerned about going back to means of livelihood one of which is their farms. We will offer to bring specialists to remove mines planted in those farms to make it possible for people to use the farms. We will also want to know your other priorities so as to know where to intervene”, the Denish group told Shettima.

Governor Shettima identified needs for intervention with building materials preferring not to receive cash donation while he also enlisted help on reconstruction of schools, intervention on Agriculture to create jobs and gender empowerment with particular interest in educating and economic empowerment of women.

The Governor explained that all the primary schools in Bama had been destroyed by insurgents during their occupation and so were thousands of private houses, municipal buildings, clinics, markets and water installations.

The Governor said he would be glad to receive building materials from the Denish Refugee Council and any none cash support that would help in the reconstruction of not only Bama but all other areas as well as support for returning victims.

The visiting group which was to return to Maiduguri promised to get back to the Governor in good time while they assessed the internally displaced persons camp in Bama town which at the start had over 20,000 IDPS.

Earlier before the visit of the Denish group, Governor Shettima had inspected series of destroyed areas and some ongoing reconstruction works in parts of Bama town. The Governor said he will focus on rebuilding schools, healthcare institutions, water installations and private some private homes under the first phase that is to continue.

Our correspondent reports that Governor Shettima on Wednesday temporarily ‎relocated his office to Bama town, an urban centre, severely destroyed by Boko Haram insurgents during their nearly two years occupation before it was liberated by the military late, 2015. Bama town, located 74 kilometers away from Maiduguri, is one of the third most populated local government areas next to Maiduguri Metropolitan Council and Biu in southern part of the State.

The Governor said his relocation was to fast track major reconstruction works which was flagged off on Wednesday soon after his arrival at about 2pm from departure in Maiduguri.

‎Also on Wednesday, the Governor had commissioned 500 newly recruited civilian JTF and vigilantes employed from locals in Bama to use community intelligence in working with the military to strengthen security in the area so as to forestall unanticipated attacks.

Shettima said “My office is now here. I decided to relocate here to live here and supervise reconstruction works. I will administer Borno State from here. I am fully prepared to be here for days to come, one week, two weeks or even more. I will not leave until we are able to rebuild a good number of private houses, municipal buildings, markets, schools and clinics. I want the reconstruction work to take proper shape before I leave. We cannot wait till forever before we reclaim our destiny. Bama is the one of the worst affected areas and we will move from here to other parts of the State. While I am here, we have a full structure of Government in place operating in Maiduguri so that activities of managing IDP’S, civil service, implementation of Government policies and programmes will continue while I am here. I will be in constant touch with Maiduguri, I came prepared.”