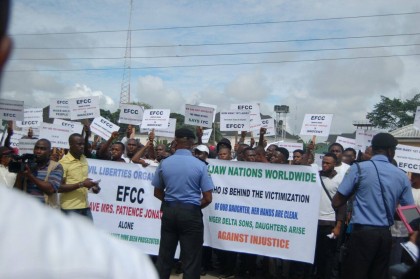 The South South Zonal head of the EFCC, Ishaq Salilu, today, September 23, 2016 told a group of protesters under the aegis of “Coalition of Civil Rights Organisations, Concerned Youths and the Ijaw Nation Worldwide,” who thronged the Port Harcourt zonal office of the Commission that, the EFCC is a law abiding agency which discharges it duties without fear or favour.

He told the protesters that the EFCC as a creation of law discharges its responsibilities within the ambits of the law. “EFCC is a law abiding organization which discharges its duties not minding whose ox is gored. We do not shy away from our responsibilities. Where there is a case, we pursue it to logical conclusion, if there is no case, there is none, we move to other things. The motto of the Commission is “Nobody is Above the Law,” he said.

Ishaq commended the protesters for the peaceful manner they conducted themselves and assured them that their letter will get to the appropriate authorities.

The protesters carrying placards with various inscriptions, such as “Patience is Innocent”, “How Many First Ladies have Been Tried in Nigeria,” “Mrs Patience Jonathan Deserves Respect, Stop Embarrassing Her,” “EFCC Stop Victimizing Niger Delta People,” “EFCC How many corrupt Nigerians have been prosecuted and jailed,” and so on were led by Sukubo Sara-Igbe Sukubo, a self acclaimed ambassador.
Sukubo said they were in the Commission to express their unhappiness and submit their letter of protest over what he called ill-treatment of the former first Lady. “We, as coalition of Niger Delta Civil Rights Organisatioin, Concerned youths and Ijaw Nation World Wide, hereby, demand that the EFCC should stay off Mrs. Patience Goodluck Jonathan, as there is no established legal or political precedent for what EFCC is currently doing to Mrs Patience Jonathan.”

Mrs. Jonathan recently instituted an action against the EFCC claiming that the money placed on “Post-No-Debit category” in the accounts of four companies currently being prosecuted on money laundering charge by the Commission, belong to her.