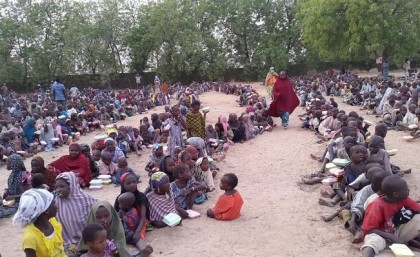 Laolu Akande, Abuja: In a determined bid to more effectively confront the humanitarian challenges in the NorthEast, President Muhammadu Buhari has approved a change in the management of the situation putting Cabinet Ministers in direct charge of sectoral coordination.

Before now, sectoral coordination of the humanitarian situation were managed by director-cadre ministry officials. But in a decision to upgrade and elevate the governance structure, the President has approved a modification of the structure by putting Cabinet Ministers in charge of governmental response to the humanitarian emergency caused by the insurgency in the NorthEastern part of the country.

Specifically, an Inter-ministerial Task Force has been established by the President to coordinate the response and work with humanitarian agencies to support the governments and other structures in the affected states.

In the Multi-sectoral Task Force, each sector will now be led by a Minister while the entire Task Force is led by the Ministry of Budget and National Planning, which will now coordinate and mobilize the domestic, governmental and private sector resources necessary to effectively meet this challenge with the urgency it demands.

The ministers who will now personally supervise their ministry’s role in the newly modified governance structure include Ministers of Health, Interior, Women Affairs, Agriculture and Water Resources. The National Security Adviser to the President and the Chief of Army Staff, National Emergency Management Agency, NEMA, and the Presidential Committee on NorthEast Intervention, PCNI, would also be actively involved in the new elevated response model approved by the President.

Defeating Boko Haram and countering violent extremism has been one of the main priorities of the Buhari administration and, to date, the military has recorded great success. However, as the military forces move deeper into the core Boko Haram strongholds, they have discovered and freed several persons who are severely malnourished and in poor health, hence the acute need for stronger coordination, oversight and direction of all NorthEast humanitarian interventions and resettlement efforts.

The Federal Government has also expressed appreciation for the human and material resources already deployed by the United Nations Agencies, International Development Partners, Non-Governmental Organisations as well as other private companies and individuals who have been assisting to meet the urgent needs of the victims thus far.

With this new management structure, the Federal Government has given assurances to the UN and all other partners, local and international, of its readiness to effectively lead the humanitarian response, deploy adequate resources and do everything possible to mobilise a rapid response in order to save lives and restore normalcy to the affected areas.