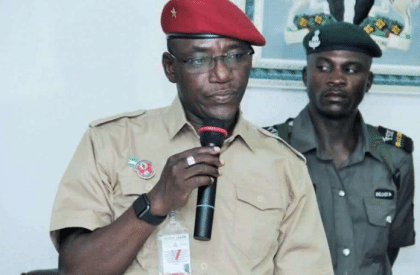 The Minister of Youth and Sports Barrister Solomon Dalung has called on state governments to invest in youth and sports development.

According to a statement released by the Senior Special Assistant to the Minister on media and publicity, the Minister made the call when he paid a courtesy visit on the Governor of Kwara State Abdulfatah Ahmed at the Government House, in Ilorin.

Barrister Dalung thanked the governor for investing in the National Youth Games through the provision of accommodation for the athletes and officials, facilities and funds.

“I want to thank and congratulate you for hosting this games. Kwara state will be remembered when the history of modern sports development in Nigeria is written because of the role the state government has played in providing not only accommodation, but also going out of your way to provide other logistics including financial support for the games.

“The panacea to all related development problems is to redirect energy to investment in sports. States will forget about spending on security because those who would naturally have created security problems for you will be dutifully engaged. There will also be much for the economy because there will be so many commercial activities involving so many people and sports will attract tourism .

“If sports is the only unifying factor across this nation, why do waste so much money holding seminars and conferences instead of investing in sports? We will need your support to redraw the architecture of sports and reposition the image of Nigeria within the comity of nations. We are determined, committed and willing to serve our country selflessly”, Dalung urged.

In his response, Governor Abdulfatah said that sports development was one of the best things that any country could truly use as an instrument to drive it’s youth development.

“This is why developed nations truly use sporting activities as major criteria to move their youths to higher levels. We have left sports to be taken to the background and we have seen the negative impact of not taking sports development to the right levels. I thank God for allowing the change process to take place in Nigeria and for allowing us to have a minister who has seen the right direction for driving sports in Nigeria because you cannot drive sports if you don’t catch them young. We have competed at international levels and we have seen the impact of not preparing our youths from the cradle level. We must bring back schools sports and see sports as a veritable tool for driving a good Nigeria” the governor said.

The Minister later decorated Governor Abdulfatah with a muffler, head and wrist bands as a major contributor to the development of youth sports in the country.

The weeklong National Youth Games was declared open on Saturday by the Youth and Sports minister.

21 states including the FCT will be taking part in 13 sports and 2 demonstration events namely rowing as well as roller skating.