From An Unknown Model To Winner Of Project Fame West Africa 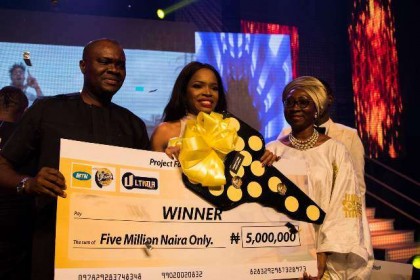 This is the story of a 25-year-old Okiemute Ighorodje who was crowned the winner of MTN Project Fame West Africa Season 9 at the grand finale of the event.

The graduate of Linguistics & Communications from the University of Port Harcourt is now the proud owner of N5 million, a brand new SUV, and a music recording contract worth millions of naira.

Okiemute used to have a career in modeling, but lately she is following her passion as a band lead singer.

A first timer on Project Fame, Okiemute made the decision to participate this season because she was certain she had built enough confidence, hence she auditioned in Port Harcourt.

She came over Elizabeth who emerged the first runner-up, carting away the 3 million naira prize and a saloon car.

The second runner-up was Kitay, who took home 2 million naira and a saloon car while Pere who seems to be skilled at performing Sam Smith‘s hit official theme song for the James Bond film-Spectre “Writing on the Wall” clinched the fourth position taking away the 2 million naira that accompanied it.

Dapo was in the fifth place, going home with 1 million naira while Winner came sixth and went home with N500,000.