Palmer, ‘the King’ of golf dies 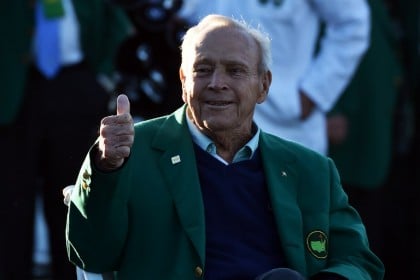 Palmer died at the UPMC Presbyterian Hospital in Pittsburgh, where he had been undergoing heart tests since Thursday, the Pittsburgh Post-Gazette reported.

Fondly known as “The King,” Palmer won seven major championships during his playing career, which began in the 1950s, and was one of 13 original inductees to the World Golf Hall of Fame in 1974.

US President Barack Obama tweeted a photograph of himself and Palmer in the White House, saying: “Here’s to The King who was as extraordinary on the links as he was generous to others. Thanks for the memories, Arnold.”

Jack Nicklaus, who along with Palmer and Gary Player was responsible for popularizing the game in the 1960s, described Palmer as an “icon” and a “pioneer” who “transcended the game of golf.”

“He took the game from one level to a higher level, virtually by himself,” Nicklaus wrote in a statement on Twitter of one of his closest friends.

“Golf lost a great friend. He was the king of our sport and always will be.”

Tiger Woods thanked Palmer in a Twitter post for his “friendship and counsel” and wrote, “it’s hard to imagine golf without you or anyone more important to the game than the King.”

Palmer, born on September 10, 1929, in Youngstown, Pennsylvania, was taught to play golf by his father who was the head pro and greenskeeper at the country club that was next door to the family house.

Palmer attracted a devoted legion of fans called “Arnie’s Army” through his magnificent performances on the golf links, his magnetic personality and his sense of kindness and thoughtfulness.

A drink combining lemonade with iced tea was given Arnold Palmer’s name in the 1960s after a woman overheard him ordering the mixer and told a waitress “I’ll have that Arnold Palmer drink.”

In 2002, Palmer played his 147th and final round on the illustrious links of the Augusta National, where he claimed four Masters championships.

“I just think it’s time. My golf has been pretty lousy of late, and it doesn’t warrant being here playing,” the then 72-year-old Palmer told reporters after shooting a 17-over 89 in the first round – matching his worst score ever in 48 appearances.

“I like to think there’s always a couple more good rounds in my body, and maybe there are. But I haven’t shown up here.”

Palmer remained highly involved in golf after retiring, presiding over the annual Arnold Palmer Invitational, the only living player with his name attached to a PGA Tour event, Golfweek said.

He received the two highest civilian honours in the United States – the Congressional Gold Medal in 2012 and the Presidential Medal of Freedom in 2004.

Palmer was also seen as an excellent businessman, a prominent advertising spokesman, a skilled aviator and a talented golf course designer.

His health had been in decline since late 2015, Golfweek reported, and a ceremonial tee shot at that year’s British Open was his last public golf shot.