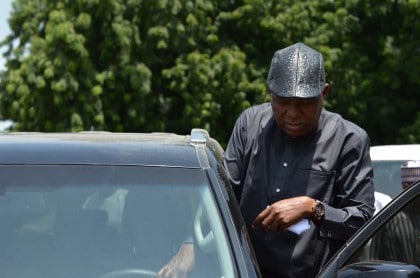 Isa Gusau, Maiduguri: Borno State has lost its Commissioner for ‎Environment, Alhaji Waziri Imam, a development that made Governor Kashim Shettima to end his temporary relocation to Bama and tour of destroyed communities after the Governor visited Chibok, Gwoza, Askira-Uba and Damboa local government areas, all in southern parts of Borno State.

Secretary to Borno State Government, Usman Jidda Shuwa announced the Commissioner’s death in a statement. The Commissioner, who is a younger brother to an APC national chieftain, Alhaji Kashim Imam, died after a brief illness in Maiduguri on Wednesday morning. He died at the age of 54 and he is survived by a wife and six children.

Shettima who was visibly shocked by the news, had from his temporary residence in Bama proceeded on tour of communities affected by Boko Haram destructions in southern parts of the State and to also supervise ongoing reconstruction works in some of the areas.

The late commissioner was buried on Wednesday evening in Maiduguri amidst tears.