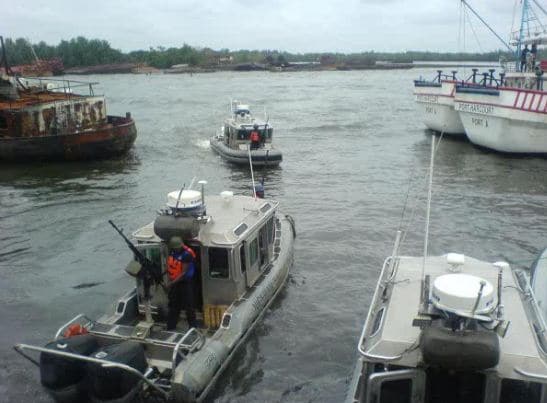 In a statement signed by Director Information, Nigeria Navy, Commodore Christian Ezekobe, said three of the suspected oil thieves were arrested around Prime Energy, others were caught conveying ten drums of allegedly stolen petrol and five drums of illegal refined diesel in the three speed boats.

The statement added that the sum of over N2.6 million was found over to the Nigeria Security And Civil Defence Corp.

Similarly, NNS Pathfinder has destroyed an illegal petrol refinery in Isalka community in Rivers State where a Cotonou Boat loaded with crude oil was impounded.

In another related development, the National Human Rights Commssion has taken steps towards addressing an alleged violation of human rights of a construction company by the Nigerian Navy.

Executive Secretary of the Commission, Professor Bem Angwe while receiving a delegation from the Nigerian Navy on the matter promised fair investigation in accordance with the rule of law.