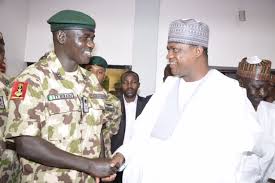 “We are here to join Your Excellency in praising Allah (SWT) and giving thanks to Him for your life; for your leadership, for your commitment to serving the people, for the examples you always set for us and to pray for long life and good heath as you push forward with your services to our people”, the deputy governor said.

The deputy governor also conveyed a gift of five bulls to His Excellency the governor on behalf of the delegation he led.

They prayed Almighty Allah (SWT) to grant the governor good health, wisdom and long life to continue to serve the people of the state. The House members also announced a gift of two bulls and 20 bags of Made-in-Nigeria rice to celebrate the governor’s birthday.

Members of the State’s Correspondents’ Chapel also visited to felicitate with the governor. Led by duku joel of the Nation, the journalists joined others to wish the governor well as he marks his diamond anniversary.

In his separate speeches to the various people who came in to rejoice with him, the governor expressed gratitude to Almighty Allah (SWT) for sparing his life to reach 60 years of age, saying he has nothing else to do for Allah’s favours on him than to continue to dedicate his life to the service of the people.

The governor said that he has donated all the birthday gifts brought to him (namely seven bulls and 20 bags of rice) to the remaining Internally Displaced Persons (IDPs) living at the Pompomari Primary school camp in Damaturu.

The new army commander said he will work with the State Government to ensure peace and security and make Boko Haram history in the State.

The governor praised the military and other security forces for their gallantry and professionalism, saying “under the leadership of President Muhammadu Buhari, they have lived up to our expectations in terms of security and defeating Boko Haram”.

H.E Governor Gaidam added that the terrorist group Boko Haram is in ‘irreversible retreat’ and assured the army commander of the state government’s continued support and partnership.

In his remarks to the outgoing Consul-General of the Saudi Consulate in Kano Mr. Majid al-Qahtani, Governor Gaidam expressed happiness with the cordial relationship between the Saudi mission in Nigeria and the Yobe State Government. He said that he will personally miss the outgoing Saudi diplomat who over the years has become a personal friend and brother.

Mr. al-Qahtani said he came to felicitate with the governor over Eid-al-Kabir and to fraternise with the governor whom he described as a great servant of the people of Yobe State and of Islam. He added that he also visited to extend a personal invitation to the governor for the upcoming celebration of Saudi National Day taking place next week in Kano..