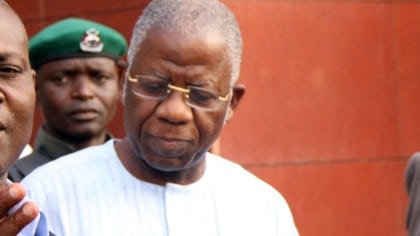 Wilson Uwujaren, ABuja: Justice Olasunmbo Olajumoke Goodluck of the Federal Capital Territory High Court sitting in Maitama, Abuja on Thursday, September 29, 2016 adjourned to November 15 – 16, 2016 for continuation of hearing in a case of abuse of office and obtaining by false pretence brought against a former Head of Service (HoS), Stephen Oronsaye by the Economic and Financial Crimes Commission, EFCC.

The adjournment was at the instance of Oronsaye’s counsel, Kanu Agabi, SAN, who told the court that, he was indisposed.

Oronsaye, who was also the chairman of Presidential Committee on Financial Action Task Force, PCFATF, is facing a 2-count charge for allegedly taking undue advantage of his office to receive N190million, part of a N240million grant which the committee received from the Central Bank of Nigeria, CBN, and converted same to personal use.

Shortly before the case was adjourned, the prosecution (EFCC) presented its sixth witness, Hamad Bello for the purpose of cross-examination.

Bello, an operative with the EFCC, while being cross-examined by Agabi told the court that, there had been suspicion by the Nigerian Financial Intelligence Unit, NFIU on the activities of Stephen Orosanye before a petition was brought against him.

He further stated that the record of such suspicion by the NFIU is documented.

“Some members of the committee were under suspicion and that was as a result of the petition which mentioned their names and as such they were investigated and we came up with findings that brought about the charges”, Bello said.

According to him, “the Commission wrote to the Office of the Accountant General of the Federation, AGF, in regard to the authenticity of the Zenith and Access Bank account to which the AGF confirmed the Zenith Bank Accounts, adding details of transactions done with the account but denied knowledge of the Access bank account.”

At this point, the defence counsel sought for adjournment saying that he could not continue and he was obliged.

It would be recalled that, on April 14, 2016, the third prosecution witness, PW3, Jalal Arabi while testifying told the court that, Oronsaye concealed the identity of the Access Bank account he opened in the name of the Committee.

Arabi, a former secretary of PCFATF, told the court that, he only got to know about the existence of the Access Bank account in July 2015 when he was summoned by the EFCC to answer ques