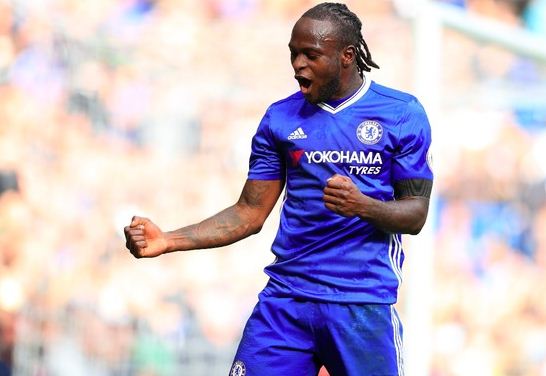 The hunger and drive to prove himself at a higher level could only benefit Chelsea and the Super Eagles, but while the Kaduna-born winger had a decent first season with The Blues, playing 43 games in all competitions, and finding the back of the net on 10 occasions, that tally remains his highest return in club football.

ALSO READ: Chelsea Have Completed The Re-Signing Of David Luiz

For Moses, the return of Jose Mourinho in 2013 proved to be an obstacle in his career development; for the next three seasons, he was shunted out on loan, unwanted by the Portuguese coach. 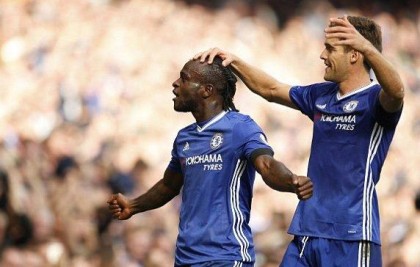 Victor Moses and teammate celebrate his goal against Leicester City over the weekend (photo: Reuters)

With Mourinho in charge at Chelsea, there seemed to be no way back for Moses, and despite impressing regularly in preseason, and progress appeared to serve only to put the Nigerian back on the loan market, rather than the first team.

Under Mourinho, Moses made only one appearance—in the Community Shield loss to Arsenal in August 2015—and even that was an eight-minute cameo.

The arrival of Antonio Conte to Chelsea opened a new door for Moses, he has been handed a fresh opportunity to impress at Stamford Bridge, and finally has a coach who sees how to include him in his starting XI and appears to know how to get the best out of the Super Eagles attacker.

Moses has repaid the faith placed in him by the Italian manager and has responded with brilliant performances.

His direct running and hard work has played him into the first team, and prompted renewed optimism about the player’s prospects in West London.

He’s rewarded Antonio Conte with three goals so far this season, with two of those coming in the Premier League against Burnley and Leicester City, and the other in the second round of the EFL Cup against Bristol Rovers.

Conte’s switch to a 3-4-3 also favours Moses, as his role as a wing-back enables him stretch the play out wide and run at the defenders—his biggest strength.