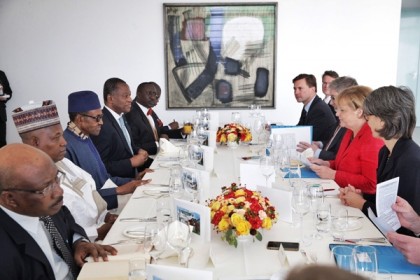 PRESIDENT MUHAMMADU BUHARI returned to the country after a three-day intensely busy State Visit to Germany which, as is usual with his foreign engagements, was characterized by punishing schedules.

Unfortunately, an important trip such as this one planned to boost trade and investment, enhance security partnership and pitch the country to eager investors became overshadowed by public outcry over some remarks President Muhammadu Buhari made in Germany, which have sadly been misconstrued by the media and some members of the public.

I can assure you that President Buhari’s sense of humor is one of his most distinguishing characteristics, despite his stern mien.

President Buhari has been an invaluable support to his wife, and I know that he has great plans for every Nigerian woman. Five of his daughters have acquired university degrees. One of them just finished law school and another one undertakes a higher degree program.

I hope that all well-meaning Nigerians will put an end to the unfair insinuations that have been generated by President Buhari’s jocularity. Seeing a well-meaning leader being so misunderstood is painful for me.

Let us hope that God continues to give him the grace and wisdom he requires to steer Nigeria through this difficult time in our country’s history.
In the course of this historic visit, he held formal talks with Chancellor Angela Merkel, a roundtable with the German President Joachim Gauck, a meeting with business leaders and an interactive session with Nigerians resident in Europe. A number of sides, but equally important meetings were dotted in-between these.

Three big-ticket items on President Buhari’s Berlin agenda were security, trade and investment, climate change and its consequences for the Nigerian eco-space. A breakthrough was achieved in all areas covered by the discussions.

Bilateral relations:
Chancellor Merkel was the first leader of a major economic power in the world to have foreseen what a Muhammadu Buhari administration would mean to Nigeria, Africa, and the world. As Chairperson of the “G 7” group of industrialized nations, she extended a hand of fellowship to him upon his victory in the 2015 elections. She asked him to be ready with his wish list and be present at the G 7 meeting to brief its leaders.

Since that time, there had been a big demand for President Buhari all over the world, a demand that our officials in Foreign Affairs insisted must be cashed on or else we missed the opportunity.

President Gauck came here in February at the head of a business delegation, a visit that pushed the existing relations up by several notches as manifested by the setting up of a one-stop investment center to facilitate foreign investment and partnerships.

Germany has also proposed a twining of two cities, Lagos and Frankfurt to facilitate the sharing of experience, meeting of businesses, trade and investment as well as exchange of visits by officials.

In the course of the visit by President Gauck, a pledge by the EU to spend fifty million Euro (€50 m.) against terrorism in the Lake Chad basin area was announced.

President Buhari’s state visit brought closer the relationship between Nigeria and Germany in addition to breakthroughs in several areas of negotiations.

Business/Investments.
The other key success area is the investment. The President and his team held a highly successful business forum which had in attendance over 100 Nigerian and German business leaders with interests in industries across Manufacturing, Information Technology, Healthcare, Construction, Training, Agro-processing, Power, Mining and Consumer businesses.

In a speech at the meeting, President Muhammadu Buhari decried the current low level of trade and investment between both countries and Nigeria’s openness for business and long-term investment from Germany. He highlighted the steady work of renewal that has started in the country and the progress that is being recorded in the government’s pillars of security, governance, and the economy.

He also presented a strong case on Nigeria’s compelling fundamentals and stated the priority sectors of the government in which investments are being sought as being Agriculture, Industrialization, Solid Minerals, Digital Economy, and Infrastructure, especially power generation.

The biggest gypsum producer in the world has already obtained an exploration license for the mineral and is looking to commence local production in Nigeria. A well-known consumer brand with over 50,000 employees worldwide is considering the production of its laundry detergent locally. The company has already invested $250 million locally, with 900 employees. The transition to local production will significantly increase the number of Nigerians employed.

Finance:
The President stated that the Nigerian Development Bank will soon commence operations to help provide additional funding to the Small and Medium-Scale Enterprises (SMEs). As a large contributor to the economy, funding for the SMEs will help spur inclusive economic growth. He thereafter charged government officials and the business community to enhance the process of achieving tangible results that are mutually beneficial to both countries.

Economic relations:
A significant takeaway from the Presidential engagement in Germany is the agreement to give vocational skills training to thousands of our youth.
Germany is always known to be a strong developer of apprentice skills. In addition to their reputation for quality education, the distinguishing feature of the German economy is that emphasis on skill development.

What President Buhari got from this trip is a commitment by Germany to share with Nigeria their skills in agriculture, IT, telecommunications, machinery, aviation, vehicles, healthcare, construction and so forth.

As part of the steps towards imparting the vocational skills, there will be a collaboration between the German Engineering Federation (VDMA) and a Nigerian conglomerate to build a technical school for artisans. The school will train Nigerians for three years, of which 50percent of the time will be spent in the school and the remaining 50percent of the time spent gaining practical experience. This model will be scaled up for the other parts of the country based on the success of this cooperation.

Agriculture:
Nigeria and Germany had useful discussions on a program of food processing locally, rice and oil milling with the aim of leavening that country’s experience in a new plan by the administration to create wealth in rural communities.

There also plans for a financing fund for agriculture in Nigeria to assist small and medium size entrepreneurs and cooperatives in the agricultural sector.

Following the MOU at the Bi-national Commission, agreements were also struck for energy partnership in renewable energy. Several states characterized by hot weather, mostly in North have signed for solar Independent Power Project, IPPs. A 30 Megawatt power plant is coming up in Adamawa while Bauchi, Benue, Gombe, Kano, Kaduna, Sokoto, Katsina and some others are in the queue.

Security:
Germany has offered Nigeria support in the war against terrorism with mine detectors, radar equipment, and a field hospital.

Immigration:
Another key area of cooperation is immigration.

There are thousands of illegal immigrants from Nigeria currently in Germany. On their records, 20,000 Nigerians enter their country each year. This is a sore issue for Germany. Of these numbers, only about nine percent of those who enter clandestinely qualify for legal asylum. To deal with the issue, they have indicated to Nigeria their willingness to train all prospective deportees in skills they can use back at home. In addition to this, two other Nigerians will be given free vocational training for everyone deported illegal immigrant.

Climate Change:
President Buhari never missed an opportunity to make a pitch for the recharging of the Lake Chad, now only ten percent of its original size, whenever he met the leaders of rich countries.

He has been persuaded a long time ago that the best way to save the lake Chad and the people who inhabit its basin from the corrosive effect of the climatic change is to divert water from the Congo Basin to the Lake Chad.

A study financed by Nigeria indicated that USD 15 Billion will be needed to do this but it is the kind of money that neither this country nor its neighbors can muster.

Having successfully established that the climate change has a lot to do with the drastic decline of livelihoods in the area and is the root cause of the Boko Haram insurgency, the President is convinced that recharging the Lake is no longer the sole business of the Lake Chad Basin countries but that of the wider world.

Given her commitment to saving the environment, Chancellor Merkel had shown keenness in the project and is willing to be a part of the effort.
Her reported earmarking of €18 billion for the project was misconstrued from her speech. After a repeated playback of the speech, the same conclusions were unfortunately drawn. Angela Merkel’s commitment is however to the tune of €18 million on the Nigerian side and the rest €32 million to the rest of the Lake Chad basin countries, with all of the money coming from the European Fund. Nevertheless, eighteen Million to support ongoing efforts in the North East is still a mouthwatering amount.

New and Pending Issues.
The Nigerian delegation also had useful discussions on road and rail development, gas exploration, equipment and surveillance for the protection of oil and gas infrastructure in Niger Delta, upgrading of Defense Industries Corporation, DICON, cooperation in rule of law and polio eradication.
Last but not the least, the President used a moment of his time in Germany to act his role a Commander-in-Chief by paying a visit to a recuperating army officer injured in the course of duty in the North East.