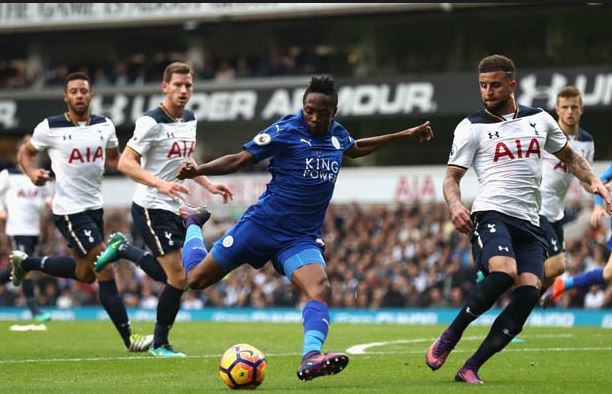 Ahmed Musa equalized for Leicester city proved to be a frustrating afternoon at White Hart Lane for Spurs as they threw away their lead before being denied a win by the woodwork.

Last season’s main protagonists in the title race remain separated by eight points in the table, but avoiding defeat on the road for the first time in 2016-17 will have enthused Foxes boss Claudio Ranieri.

Spurs were utterly dominant in the first half and were deservedly ahead at the interval through Janssen, the summer signing scoring his third penalty of the season to open his Premier League account.

A combination of Kasper Schmeichel saves, poor Spurs finishing and the woodwork had kept Leicester in the game and they capitalised just three minutes after the break through Musa.

Having come into the contest just a point off top spot, Spurs dropped further behind Arsenal and Manchester City, although next weekend’s North London derby gives them a chance to immediately respond.

Schmeichel was by far the busier of the goalkeepers in the first half, but the Dane stood firm to repel long-range efforts from Dele Alli and Danny Rose, while Christian Eriksen and Victor Wanyama were off-target from outside the box.

Leicester’s first opportunity came after the half-hour mark, but Shinji Okazaki could only head a superb Riyad Mahrez cross over the crossbar.

That sparked a greater focus from Spurs’ attack and Leicester were unable to limit them to pot shots as they had done previously, Janssen flicking wide before Alli rattled the bar from Kyle Walker’s cut-back.

And the Foxes’ resistance was broken a minute before the interval as Robert Huth was adjudged to have wrestled Janssen to the floor and the Dutchman kept up his impressive record from 12 yards so far this season.
Leicester’s counter-attacking threat had been largely nullified, but they executed a perfect breakaway after 48 minutes, Jamie Vardy pouncing on Wanyama’s loose touch to burst into the penalty area and square for Musa, who finished bravely under pressure from Walker.

Spurs again started to force the game, although the earlier pace had been sapped from their play and Leicester were able to drop in comfortably, reverting to their title-winning formula.

Schmeichel reacted sharply to hold a low, deflected Eriksen effort and Janssen again had the beating of Huth before clipping wide.

Spurs’ final chances came and went in agonising fashion as Jan Vertonghen’s powerful header hit the crossbar, before the Belgian then curled wide from 25 yards and Rose fired into the side netting, and Mauricio Pochettino will crave Harry Kane’s return to add a clinical touch after five winless games in all competitions.