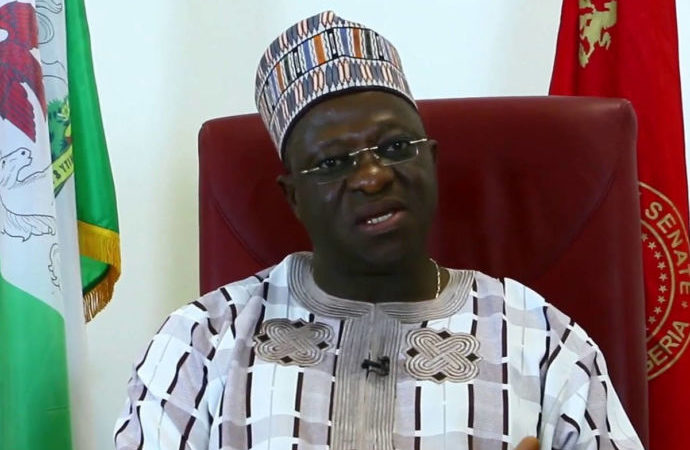 Wilson Uwujaren, Abuja: A former member of the Plateau State House of Assembly, Banahel Andong, on November 8, 2016, told a Federal Capital Territory, FCT, High Court, Gudu, Abuja, that it is not wrong for funds allocated to a state to be credited to the personal account of an individual.

The former lawmaker, who is currently the acting District Head of Manguana, in Boggos Local Government Area, in the state, testified as for the ninth defense witness, in the ongoing trial of a former Plateau State governor, Joshua Dariye.

Dariye is being prosecuted by the Economic and Financial Crimes Commission, EFCC, before Justice Adebukola Banjoko for allegedly siphoning about N1.2 billion Ecological Fund meant for the state, while diverting about N204million meant for the state treasury, to Ebenezer Ratnen Ventures, ERV – a company linked to him.

Under cross-examination by prosecuting counsel, Rotimi Jacobs, SAN, he was asked if he would be surprised if the state’s statutory allocation was paid into his personal account.

“I will be so happy, I’ll be very happy; it depends on the memo accompanying it, but of course the government can give me money; when we lost our traditional ruler, the government gave me money, I was very happy and I collected it,” he said.

When he was further pressed by Jacobs, if it was proper to pay funds meant for the local government area into a personal account, he again responded in the affirmative.

However, when Jacobs further pressed him, if government funds meant for the state’s House of Assembly can be paid into the personal account of a serving lawmaker, Andong said, “It can’t.”

Andong, who served as a legislator between 1999 and 2003 under the platform of the Peoples Democratic Party, PDP, told the court that as chairman, House Committee on Works, Housing, and Transport, he carried out his oversight duty on several projects carried out by the Dariye administration to combat erosion in the state.

Earlier, during examination by the defence counsel, G. S. Pwul, SAN, he noted that: “the bill setting up the Direct Labour Agency, which carried out the road construction works, was sent to the House of Assembly, read by the speaker of the Assembly on the need to have such an agency to solve the rural infrastructure needs of the state.”

While admitting that he did not know the source of the funding for the road projects, he said, “all I know was that there was some intervention from the federal government on the ecological funds to assist the state, and the Dariye administration did a very good job in arresting the situation and several roads were reclaimed from erosion in the state.”

After his exit in 2003, Andong was appointed by the administration of Jonah Jang, as commissioner for local government and chieftaincy affairs, but spent a little above a year in the office before he was dropped in a cabinet reshuffle, having fallen out with the governor. He afterward joined the Plateau Integrity Group, a socio-political lobby group calling for the probe of Jang for corruption.

Currently, a member of the All Progressives Congress, APC, Andong, was questioned by Jacobs, on the mission of the Integrity Group as regards speaking against corruption in the state.

“You and the members of the group set it up calling for the probe of Jang’s government for corruption,” Jacobs queried.

Answering in the affirmative, Andong however, buckled when the prosecuting counsel, questioned him further if the group extended its probe into administrations from 1999 to 2015, which included that of Dariye.

“I’m not the chairman of the group and so I can’t speak on their behalf,” he said.

Justice Banjoko has adjourned to November 9, 2016, for further hearing.