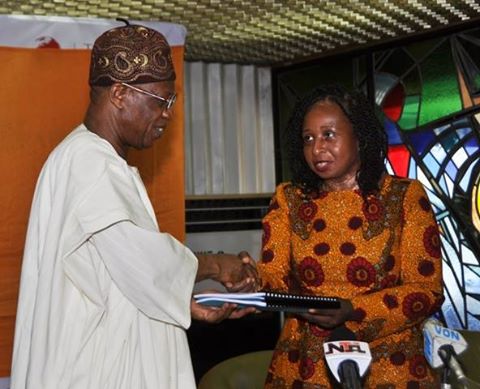 Segun Adeyemi, Abuja: The Minister of Information and Culture, Alhaji Lai Mohammed, on Monday received the report of the Review Committee of the Motion Picture Council of Nigeria (MOPICON), with a pledge to immediately kick-start the process of making the regulatory body a reality.

Speaking after he was handed the reviewed document by the Chairperson of the Committee, Ms. Peace Anyiam-Osigwe, the Minister thanked the committee members for a job well done.

“Let me sincerely thank the members of the committee for their hard work over the past several months. In particular, I commend their selfless service.” I sincerely hope that their sacrifice and hard work will yield fruits by leading to the establishment of MOPICON.

“We will critically look at the reviewed draft document, which you have handed over to us, and we will immediately kick-start the process of making MOPICON a reality for the benefit of the movie industry,” he said. Alhaji Mohammed used the opportunity of the report’s submission to
clear the air on the controversy that followed the inauguration of the review committee on 12 April 2016, saying the government has no hidden agenda and will not be part of anything that will stifle the growth of the burgeoning industry.

“I have followed the debate that ensued among the stakeholders in the aftermath of the inauguration of the Review Committee. Some argued that the government has no business in helping Nollywood to set up a self-regulatory structure, while others are of the contrary opinion. Let me re-state what I said at the inauguration of this committee on April 12th 2016, that in line with our overall responsibility for the nation’s information, culture and tourism policies, our role in helping to set up MOPICON is simply to enable Nollywood to play a meaningful role in national development.

“Again, one of the ways we think we can tackle frontally the many challenges militating against professional and career fulfillment in the movie industry is to have a central body we can always refer to in decisions aimed at improving and modernizing the motion picture industry.

“Also, government’s interest in the setting up of MOPICON is driven by the fact that we at the supervising ministry need to work with a formidable representative group that is empanelled to lobby for the growth, development and welfare of the industry and its practitioners as well as make for a better organized and more visible and vibrant Nollywood industry,” he said.

In her remarks, Ms. Anyim-Osigwe said members of the committee were unanimous in their decision to support the establishment of MOPICON.

“What we come to understand and appreciate is that a council of some sorts is required in order to make this industry work. How this council will operate, we have advised,” she said.

She said in drafting the report, they have taken into consideration all shades of opinions from the stakeholders in the industry who offered their input on the setting up of MOPICON.

“In this document, we have taken cognizance all the guilds and associations and we have also taken into cognizance all the uproar in the media about the MOPICON and what it stands for and the misconception of what it is,” the committee Chairperson said.

The report submitted to the Minister contained the Review Act, Code of Ethics Review and the Report of the Committee’s Proceedings.