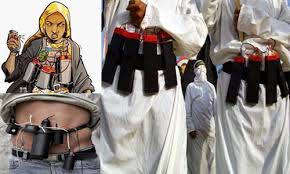 Suicide Bombers With Their Bomb Vest

This is to draw the attention of the general public to recent trend used by desperate remnants of Boko Haram Terrorists (BHT).

Recently, two female suicide bombers knocked at the door of one Bulama and Usman about 200 meters apart in Kalari general area of Maiduguri.

The daughter of the Bulama opened the door, while the Usman himself opened his own door immediately the suicide bombers detonated their suicide vest, in the process killing the unsuspected little girl, Usman including the two female suicide bombers.

The general public is hereby advised to be cautious and wary of strange persons knocking at their doors.

Security is a collective responsibility; the public is to engage in neighborhood watch. Suspicious movement of persons should be reported to security agents without any delay.

The public is once again reminded that curfew is still enforced by 10 pm daily, any defaulter will be prosecuted accordingly.