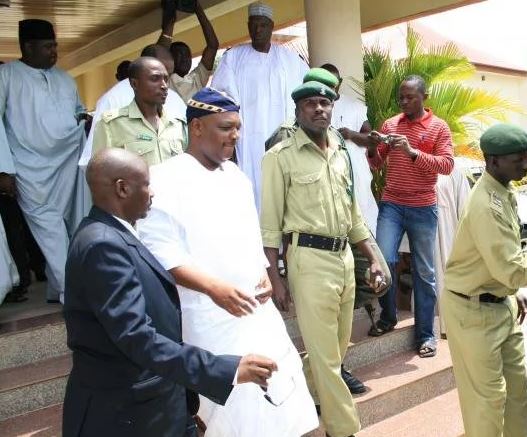 Wilson Uwujaren, Abuja: A former governor of Taraba State, Jolly Nyame, who is being prosecuted by the Economic and Financial Crimes Commission, EFCC, before Justice Adebukola Banjoko of the Federal Capital Territory, FCT High Court, Gudu on a 41-count charge of criminal misappropriation of N1.64bn state funds will know his fate on February 14, 2017 as to whether he has a case to answer or not.

The prosecution had on November 22, 2016, closed its case against Nyame after presenting 14 witnesses. The trial, however, witnessed a twist on the same day, as the defence told the court that it intended to file a “no case” submission, as it believed that there was no prima facie case established against Nyame.

At the resumed sitting today, both the prosecution and the defence adopted their written addresses and gave oral arguments.

Charles Edosomwan, SAN, counsel for Nyame, alluded to the fact that “crucial elements are missing in this case”, and urged the court to “hold that the testimony of prosecution witnesses have been so damaged and can’t be relied on”.

He further argued that there was no direct link between Jolly Nyame, and a house allegedly procured by him using the diverted state funds, noting that “nobody tendered registered documents linking him to it”.

According to him, the trial was “an unnecessary waste of time through which an ordeal was inflicted on Nyame, just because he was a former governor”.

Prosecuting counsel, Adebisi Adeniyi, however, countered Edosomwan’s submission, noting that “a prima facie case had indeed been established against Nyame after the prosecution called 14 witnesses who testified to how they assisted him to divert state funds”.

“In the course of this trial, the defendant did not at any time deny that he received some of the money in question, and in fact, he has even said that he is ready to return the money,” Adeniyi said.

He reminded the court that some of the witnesses had confessed in court admitting their several roles during which funds were withdrawn from the state treasury for Jolly Nyame’s use.

He said: “Those who took part in the purchase of stationery have come to court and explained their roles through which the money was instead, transferred to a bank account belonging to close confidante of the defendant, and all these did not contend.”

Citing Exhibit Z6, Adeniyi reminded the court that another witness testified to how money purportedly earmarked for the purchase of grains, was never utilised for what it was pencilled for, but instead, “the money was brought to the defendant”.

He further argued that: “All your lordship will do is to see whether there’s ground upon which your lordship can ask the defendant to enter his defence, not that he is guilty or not, or whether evidence is good enough to convict him, but to say he should defend himself.”

He concluded that in the instant, the prosecution has led sufficient evidence to warrant calling the defendant to enter into his defence.

“We urge your lordship to overrule this no case submission and to hold that the defendant has a case to answer,” he said.

After listening to the arguments, Justice Banjoko, urged both parties to submit the authorities cited in their submissions, adding that “I want to go through all the evidence, and will give my ruling on February 14, 2017.”

NEWER POSTNigerians In The Diaspora To Be Captured In The Pension Scheme Soon—PTAD, DABIRI-EREWA
OLDER POSTDefense Minister’s Condolence Message On Kala-Balge’s Incidence