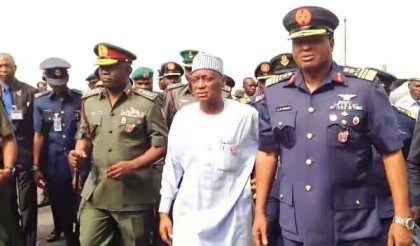 (Radio Nigeria) Federal Government on Monday presented cheques for insurance claims to families of 218 deceased officers and men of the armed forces who died in the line of duty.

The Minister of Defence, Mansur Dan-Ali, who presented the cheques, also promised that the welfare of the serving military personnel would be given priority.

Dan-Ali, however, expressed satisfaction that with the improved security and “overwhelming successes in the fight against insurgency”, fewer military casualties would be recorded in years to come.

He also noted that life insurance claims being paid over the years had grown “tremendously”.

This, the Minister attributed to heightened activities of insurgents in the North-East and continued militancy in the Niger Delta, especially between 2015 and 2016.

He called for a minute silence in honour of personnel who had paid the supreme price.

Earlier, the Permanent Secretary, Ministry of Defence, Ambassador Danjuma Sheni, said cheques for insurance claims had earlier been issued to next of kin of 383 officers and men who died in the line of duty during the period.

Sheni assured that the Ministry would ensure transparency and accountability in the payment of insurance claims to families of deceased personnel.